Looks like I'll be doing the Corvo blog again this year so here's the first post for 2021 (below) and link to blog HERE so please follow that blog to keep up with this years sightings and developments:

Welcome to this year's autumn season birding on Corvo. Once again things have got off to an incredible start with a Warbling Vireo found on September 25th by Pierre-Andre Crochet and Paul Doniol-Valcroze. If accepted this will be a first for the Western Palearctic. The Western Palearctic's sixth Chestnut-sided Warbler (and third record for the Azores) was also found the same day.

Previous to this epic opening first full day by the French team, Tim Collins and Mags Grindle from the UK spent 11th to 20th September on the island and highlights included a Yellow Warbler and a Buff-breasted Sandpiper.

The first main wave of birders will arrive next week. More information can be found on the Corvo Birders facebook page HERE

Birders are encouraged to use Ebird to record all bird species on the island including common birds and migrants (Hotspot map here) which will support the work of the local report writing team and rarities committees. Many thanks in advance!

If you are visiting Corvo for the first time this year then maps of the birding locations and other information can be found in this Dutch Birding paper HERE. More information and access to previous reports and papers can be found HERE 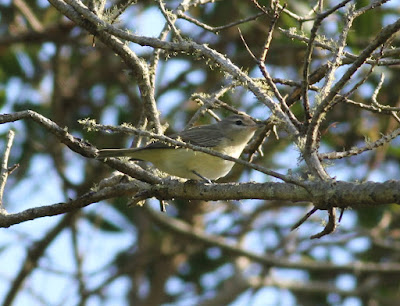 Warbling Vireo, photos above and below (Paul Doniol-Valcroze). A first for the Western Palearctic and quite a challenging identification. Distinguished from Philadelphia Vireo by paler lores, more attenuated structure, less contrast between crown and upperparts and the yellow hues being concentrated more on the sides and underparts than the throat. If the wing formula can be seen then Warbling Vireo has a short p10 (outermost primary) which extends beyond the primary coverts (barely discernible in Philly). In addition to separation from Philadelphia Vireo there are also Eastern and Western Warbling Vireos, which could be a future split, with differences in vocalisations and Western being brighter and yellower toned. This bird appears quite bright and further expert comment would be much appreciated. 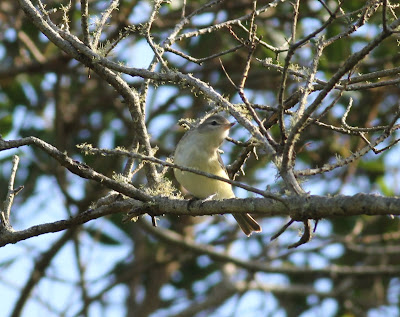 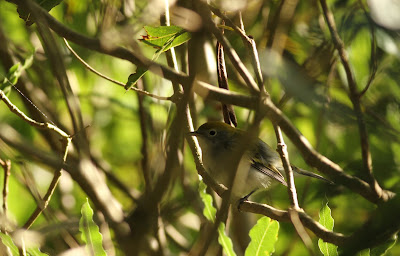 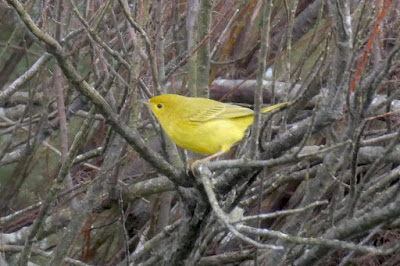