For Birdwatch article info:http://peteralfreybirdingnotebook.blogspot.com/2008/10/pioneers-birdwatch.html
Posted by Peter Alfrey at 00:05 No comments: 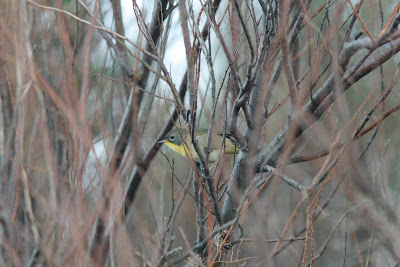 It has been pretty quiet over the last couple of days. A high pressure is well established over the Azores and most of the time has been spent looking for the sapsucker at Fogo. I suspect there is little in the way of new arrivals in weather conditions like this.
The Yellowthroats are still present and the only new bird has been an American Great White Egret which arrived yesterday. There is a Peregrine about too.
Posted by Peter Alfrey at 23:39 No comments:

Apart from the Hobby- nada.
Posted by Peter Alfrey at 00:50 No comments: 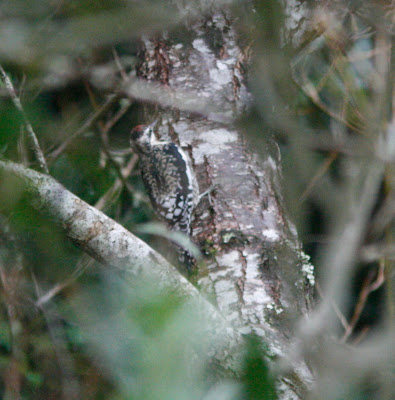 Re-found the Yellow-bellied Sapsucker today, which has been hiding in the valleys for the last two weeks.

Posted by Peter Alfrey at 20:14 No comments:

Can't be bothered to write too much because this connection keeps crashing. Saw a couple of Arctic Skuas on 23rd and yesterday in addition to the White-eyed Vireo and 2 Yellowthroats there was a Peregrine and Whimbrel. A couple of Sanderling are hanging out with the Turnstones on the Beach.
Posted by Peter Alfrey at 17:26 No comments: 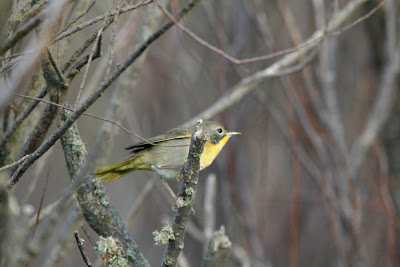 Common Yellowthroat- finally got to see these birds. 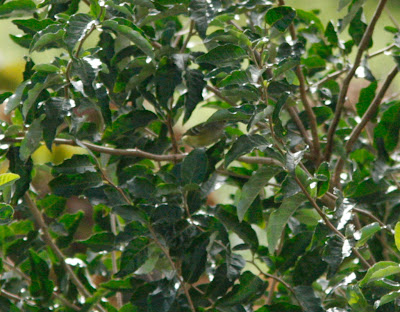 Posted by Peter Alfrey at 20:48 No comments: 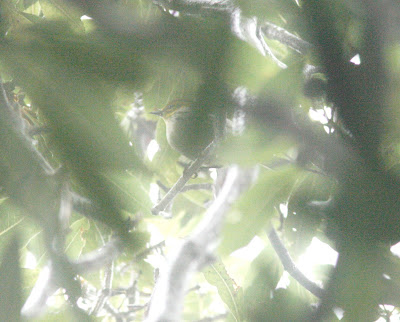 Got it. And Vincent got some photos which are quite simply mind blowing- quite un-like mine (above).

Posted by Peter Alfrey at 22:57 No comments: 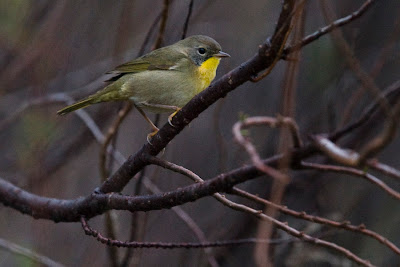 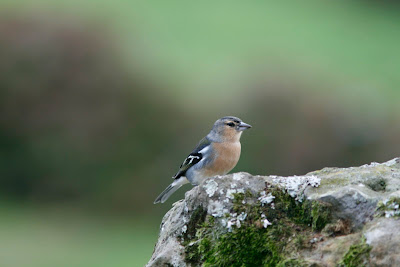 This internet connection keeps crashing so I can't be bothered to write this again. Basically Pierre found a Black throated Green and I didn't see it.

Posted by Peter Alfrey at 23:09 No comments: 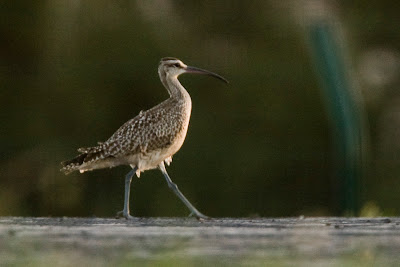 Today is very quiet again on Corvo. Bird of the day for me is a juvenile Hobby (the first for the Azores) which has been present a few days. Just seen a Hudsonian Whimbrel on the airfield which is presumably the bird from Flores. The only other bird of note was a Wheatear. There is still a Yellowthroat about but I haven't seen it yet.

The wind is blowing from the south-east and despite extensive searching by a team of 12 pan-Europen birders there is no sign of any of the megas that were on the island last week (Yellow-bellied Sapsucker, Hooded Warbler, Northern Parula, Blackpoll and Yellow-throated Vireo).
Posted by Peter Alfrey at 19:46 No comments: 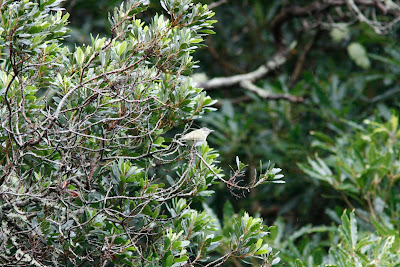 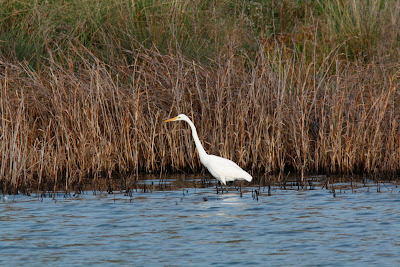 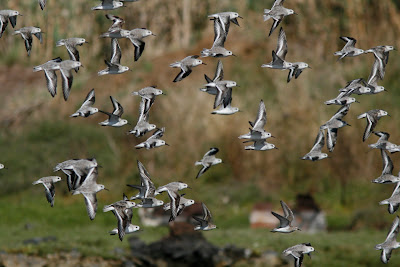 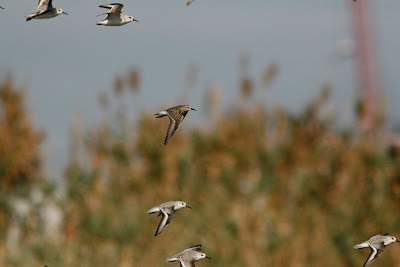 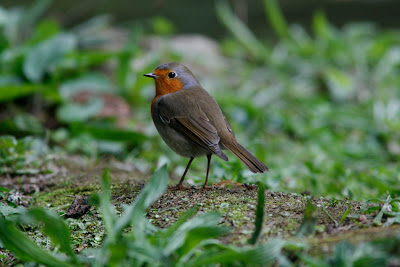 Not a good day

I spent this morning (11th October) telling Simon that I was apprehensive about Corvo this year. There had been so many quality American vagrants in Britain and Ireland that I wondered if the weather systems were more suitable for vagrants here this year, rather than the Azores. I contemplated that perhaps the epicentre of American vagrant activity would shift from the Azores to northwest Europe. There had been regular reports coming from the Azores all year, by Portuguese researchers, and it had gone quiet for a while. I suggested to Simon that perhaps we were in for a duff autumn.

Then my phone went off. Dominic Mitchell had just found a Hooded Warbler and a Yellow-throated Vireo within a minute on Corvo. By the end of the day, several de-stabilising text messages informed us that in addition, there was also a Yellow-bellied Sapsucker, a Northern Parula and two Red-eyed Vireo. Nearby on Flores there was a Scarlet Tanager.

In the middle of this we were conducting a search for a Broad-billed Sandpiper that had been seen at Wallasea, Essex. It had been missing a few days, so we went to Canvey Island to look for it there. After a while we picked up a small wader feeding amongst the Dunlins on the mudflats. It was preening at a distance. I took a couple of distant shots and on examination of the shots we concluded that this dark bird with a strong facial pattern must be the Broad-billed Sandpiper. The tide was retreating and soon all the waders would depart so we hastily released the news to several people.

Then the bird flew in closer. I got on it and exclaimed 'Oh shit'. Then it flew overhead and called just like a Little Stint. This conversation then followed;
Me: We better call them all back and tell them
Simon: Yer okay. (Simon starts going back through his numbers)
Me: You don't think anyone will come do you?
Simon: No, Everyone is on Scilly.
Me: Thank God for that.

Then we looked round and about twenty people were speed walking and running towards us. This included one guy holding a baby as he was leaping over the salt marsh and also a birder with his birder's wife. Worse of all Lee Evans was coming too. 'Oh My God!' They had all been nearby watching a Lesser Grey Shrike and had bolted at the erroneous news. By the time they had arrived they had received messages that the record was in question but continued nonetheless.

Simon and I agreed that we make no attempt whatsoever at making excuses and just take it on the chin. We had tried to call off the charge but they came anyway.

Twenty minutes of pain followed. The baby started crying, the birders wife, waited to catch our eyes, delivered a piercing look of scorn before stomping off across the marsh and everyone else walking away shaking their heads, leaving us alone on the bleak marsh with our shame.

Well, like Mush Ahmad once told me. 'It is a time bomb'. Everybody is going to make a public mess up. It is just a matter of time. Always there ticking away in the background to go off when you least expect it.

Maybe it was an episode of autumn fever. After hearing all that news from Corvo, maybe we were caught in some kind of un-hinged perception. Got jumpy and trigger happy. I don't know. But what I do know is that the ticking has started again. Lets hope it takes us a long time to forget- because it is when you forget- that it strikes.
Posted by Peter Alfrey at 22:16 No comments:

Photo:Double-crested Cormorants on the Azores 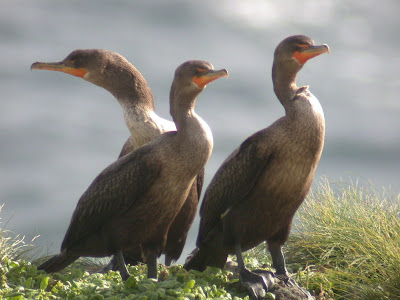 I have recently written an article for Birdwatch about my personal views on the phenomenon of vagrancy. I asked for the acknowledgement section and references to go here because I feel a few things need a little more explanation.

In short, my view on vagrancy is as follows:

There are multiple factors which can contribute to a bird turning up out of range. These factors include weather, sickness, ship assistance, migration direction preference variation at the genetic level, reverse migration, human interference, interactions between different birds in natal and wintering areas and interactions between different birds during migration. A lot of the time we can only guess at the reasons that have caused the occurrence of any particular vagrant. Each rare bird probably has a unique and complex set of factors which have contributed to it's occurrence.

However within this complex migration 'circus' certain patterns and phenomena emerge. There are clearly effects which occur as a result of vagrancy which include the colonisation of remote islands and speciation processes on these remote islands. Also vagrants are capable of pioneering the establishment of new migration routes and new wintering grounds. Therefore they are a driving force behind the evolution of migration systems and of speciation. They are quite simply- extra-ordinary and fascinating.

There is another side to vagrancy too. That is the sheer indifference of evolutionary processes which are evident by the painful and often fatal consequences of birds that go outside their normal ranges. For some there are consequences which can lead to evolutionary changes. For the vast majority, all that awaits them is confusion, discomfort and very often death.

In a nutshell vagrancy is "a story of an apparent direction, purpose and plan, which seems to emerge from the directionless discomfort and confusion of individual organisms".

There are many people who have contributed to this article. I think it is fair to say, that very few of them completely agree with my view. Main criticisms include the following: the view is not based on empirical evidence and much of it is assumption and speculation. The sample numbers are far too small to make any conclusions from and there is very little in the way of specific examples in my text. There is little systematic ringing studies of vagrants to examine their movements to back up any claims. Generally vagrants are considered of having no or little conservation value and the status quo is that they are generally unimportant. Also vagrancy cannot be considered as an overall phenomenon because there is too great a difference between short distance vagrancy (e.g. a Crested Lark in the UK) and long distance vagrancy (say a Glaucous-winged Gull). There is also a major difference between what is going on with Yellow-browed Warblers and say a lone vagrant on Scilly. Additionally there are many other factors involved in the evolution of migration systems, species range and speciation which intergrade with vagrancy. I agree with all of these criticisms, in part but all I am suggesting is a hypothesis, formulated from observation and experience, which is subject to falsification. It is, after all, debate which is the engine for arriving at the answer.
Darryl Spittle has been instrumental in helping with this article and has pain stakingly picked up all sorts of ambiguous group selection and over speculative comments I have made in earlier drafts, some which I have corrected and some which I have retained to ignite a reaction. Darryl has been extremely critical and helpful- the best sort of help. Pierre-Andre Crochet made some extremely instructive and constructive critical remarks and holds doubts regarding the fundamental principles of a genetic underpinning to vagrancy. Sam Woods basically re-wrote the article, reigning in my tendency to use too many words to say a few things . Early drafts have also been examined and commented on by specialist birding literature editors.

In terms of influences there are several prominent migration, vagrancy and popular science writers which I have very much enjoyed reading. They do not necessarily share my views but have influenced my conclusions and suggestions, presented in this article. These include, in no particular order, P. Berthold, R. Dawkins, N. Elkins, J.G Gilroy, A. Lees, S.J Gould, A.J Helbig, K.Thorup, I.Newton, K.Vinicombe and T.Alerstam.
Posted by Peter Alfrey at 17:45 1 comment:

A week of megas

According to Birdguides, they recorded 19 new megas between 25th September and 1st October. Brown Shrike, Brown Flycatcher, Eastern Olivaceous Warbler, Syke's Warbler, Siberian Thrush, White's Thrush, Pallas' Grasshopper Warbler and many more expected vagrants were found. This was an excellent example of a vagrant influx, deposited mainly in the Northern Isles and the NE coast of England. The weather system was characterised by a major high pressure generating a strong easterly airflow- 'a conveyor belt' across the near Eurasian landmass. If there is awareness of what to look for, in terms of weather systems, it is possible to make some predictions about such events. High pressure systems are often involved with vagrancy influxes. In such conditions vagrants can occur over a broad front but typically are concentrated in vagrant traps- remote islands and headlands. These sort of conditions are not to be confused with classic fall conditions. 'Falls' occur on frontal systems and involve large numbers of common migrants in localised areas. There is often little association with falls and an influx of vagrants.
Posted by Peter Alfrey at 16:59 No comments: