Back in the crack- Beddington Farmlands update

So back in Hackbridge and Beddington Farmlands again. It's certainly not the depressing and soul destroying place it was last year as there has been an enormous push on the restoration and huge positive vibe about the place. Phase 3 of the Wet Grassland habitat creation has also started, the area for phase 2 has been levelled, sacrificial crops are thriving, the mounds and paddocks are being managed intricately- it's all pretty amazing and almost unbelievable that it is all finally materialising. I think most people including myself had lost nearly all hope as the site had really become an emotionally toxic and harmful place to be with a horribly dark seemingly invincible council-corporate axis firmly established.. It looked like the future for the farmlands was to become the 'Syria' of the ornithological world- a proxy battle ground for international radical environmental groups vs the corporate-council axis with the wildlife and local community being sacrificed in the process. I had literally left the area (re-based at Holly's) and also the whole Bulgaria project was to prepare to leave the country . However it looks like I might have over-prepared for the worst! Nonetheless its all good - my personal investment in Beddington Farmlands is a lot less now (it was literally killing me)- there is still a long way to go with developing the reserve and it won't take much for things to start back sliding again and spiralling down again, so I've effectively spread risk across a wider range of projects, which is a better idea as in nature conservation the wheels move so slowly that it is quite possible to have multiple projects running at the same time and just keep running between them and if one of them gets into trouble, the others provide back ups and escapes from the toxic environment.

The whole thing should never have come to this though (in an ideal world that doesn't exist) and it exposes fundamental flaws in the democratic system and the weakness of the planning system in the newly fledged (post 2008/2009 bail outs) Corpocracy. It highlights that local community democratic structures (e.g. citizen's assemblies, localism groups) are absolutely vital as the cuts in local authority spending and staff means corporations are effectively out of control. They can hoover up ecological and social capital and transform it into economic capital more efficiently than ever before as they squeeze the last drops of unsustainable growth out of the planet. The local authority (or government) no longer provides a effective regulatory middle man position between the corporations and the people, the council is now an arm of the corpocracy- their main job to manage contracts given to private companies but with few powers to enforce the conditions of those contracts if the private companies tell the council to go fuck themselves and the contract conditions- which is exactly what Viridor tried to do.   Very few local communities would have kept fighting in the way we have. We really do have some incredible local community champions.

2 Pintails at Beddington, 3 Stonechat and 1 Whinchat were the highlights of a walk around the farmlands. A few interesting moths last night too including L-album Wainscot, Large Ranunculus, Brindled Green and Red Underwing.

Pintails among other waterfowl

Good numbers of ducks around at the moment 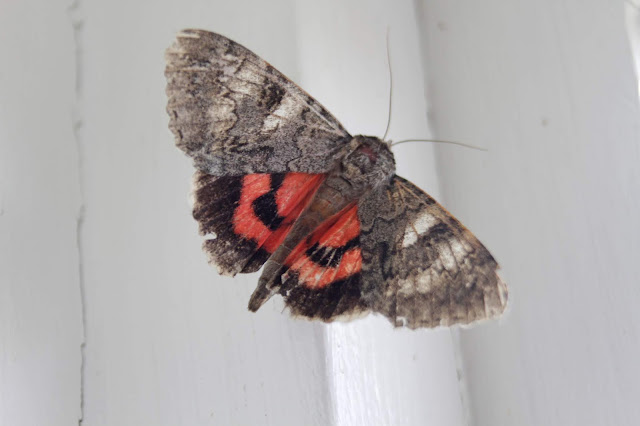 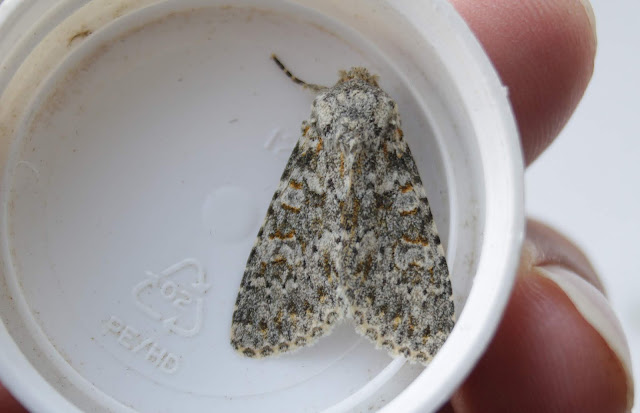 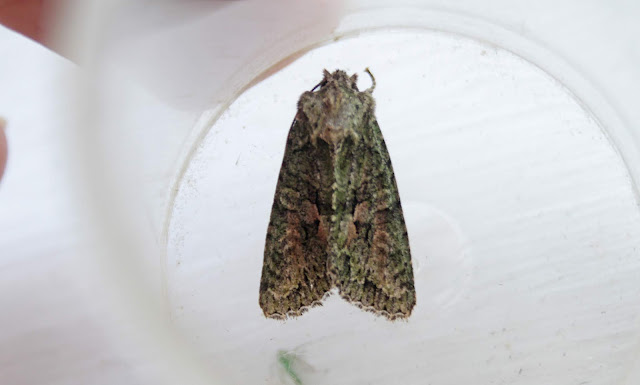 Different views of the developing wet grassland (above and two photos below) showing the expanse of this area- it really is a large and amazing area. 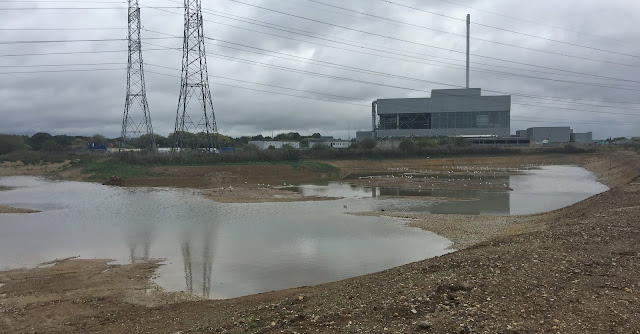 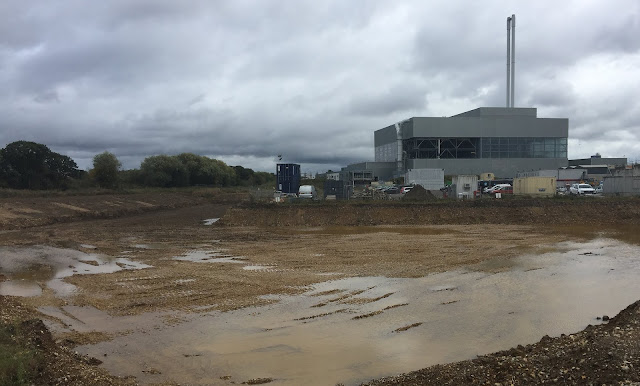 Site for the wet grassland phase 2 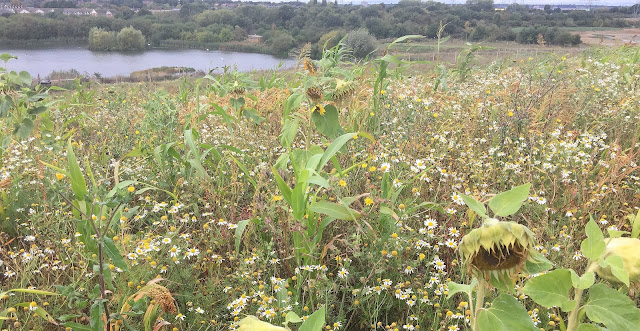 So things are looking up but the only reason things are now progressing is  that the council-corporate axis has been shaken by the local community defence with Liberal Democrat political casualties being taken (with all three Lib Dems in the Beddington North ward being annihilated by Mattey and the Independents) which has threatened the Liberal Democrat one party state through narrowing their majority. Also on 8th October, Viridor have to appear before the London Borough of Sutton Economy and Business Committee, who will decide whether legal action will be taken by the council on Viridor for breaching planning conditions. This is in response to 7500 strong petition that was set up by Tony Burton and the Wandle Forum.  This is all set in the backdrop of Viridor becoming the focus of an Extinction Rebellion international campaign (which has currently being cooled off due to the progress now being made) and the real chance of another major anti-Lib Dem campaign in the next councillor elections in 2020.   That once cosy Viridor-Liberal Democrat alliance to destroy our local environment and community for profit and to strengthen their elite positions seems to have back fired on them big time.

The whole thing actually gives me some hope that it wont just be the elites and rich that make it through the coming bottle neck as the planet collapses due to ecological and environmental break down. The people have a real chance of defending their own communities and forming regenerative societies and calling the corporate-government axis to account. It won't be a rich-poor game- it will be a level game- whoever adapts fast enough will survive ( rather has a better chance of survival). Regenerative corporate-government-people alliances are what will ultimately make it through to rebuild the destroyed planet. It's almost certain that global conflict and tension will escalate as more and more people populate an increasingly stressed planet and there will be mass human casualties (this has already started with more natural disasters in the developing world, lowering life expectancy in the first world, suicide rates up, deaths due to air pollution etc) but there will also be technological solutions and societal restructuring and evolution that will offset that. Its still a sleepy time for the vast majority of humans living in western societies. They may have heard the alarms but have not emotionally connected to what those alarms mean- they ignore them like we all ignore car and house alarms assuming its a false alarm. They write off the alarmists as eco-loons. Will the 'sane conformed masses' ever appreciate the full human cognitive spectrum and recognise the value of those 'lunatics', those who have unique insights and perception of reality and the importance of so called insanity to our species and the subjectivity of concepts of sanity and the importance of what the entire spectrum is visualising?

Maybe it won't be the noise of children marching, or the inconvenience of blocked bridges, or the warnings from scientists that wake them up. They are just sleeping through the alarms. The crying of the children and warnings of the scientists will fall silent before nature strikes back.  It will be when the negative impacts of collapse start causing them unbearable personal suffering that they will wake up and for many by then it will be far too late to adapt - a new world that has stopped trying to save them would have advanced and be out of their reach.

I got a letter from the BTO today saying I'd been nominated for the prestigious Marsh Awards for Ornithology for the Beddington Farmlands campaign.  I didn't make it as the final winner but still handy being nominated as we can promote what we've learnt at Beddington for other communities to be able to defend themselves too. It's not over at Beddington either, still a long way to go in setting up and maintaining an urban nature reserve in South London which effectively will provide another piece of the global regenerative network for nature to bounce back from and to provide vital ecosystem services and eco-social services to society as the unsustainable system collapses and a sustainable society emerges. Beddington Farmlands (and all nature reserves across the planet) will be a life line for the planet's nature and people.

Congrats for the nomination and for all the hard work going into Beddington. Thought it would end up becoming a place going down the drain a year ago...

Cheers Arjun- things are looking up! (at the moment)

Congratulations. It's difficult to judge whether your own political activism for a rival party explains the criticism of your local council given the apparent improvements that are coming to pass, but it's great to read that for whatever reason the corporation running the waste to energy facility is finally putting some money into conservation efforts. Keep up the pressure! Matt

Agree Matt, for whatever reasons, its great that things are progressing.