While we all wait for some big tech global corporation to create an algorithm that can manage global biodiversity and the economy using big data, machine learning and AI and integrate it into a new Computer  World Government Global System there isn't actually much to do (which isn't exhausting, polarising and harmful) on this planet for most of us while the old system collapses into chaos and corruption before the new one is re-booted.  Keeping busy and positive nowadays is not easy when it seems like everything is crumbling all around.
Doing things small scale and independently and integrating it into new global systems seems to be a very good way forward (the only way?) for most of us (not working in Big Tech and IT)- things that can grow in a better environment (a multi indices, post GDP paradigm one).  So it's a great time to get involved in 'de-centralised nature conservation' and basically 'go it alone' and build some things and let them float off to see where they go . My life long mates Lee and Rachel have taken this bull by the horns and have not only  bought up 9 acres of Brazilian Atlantic Rainforest and crowd funded tree planting on it but also recently bought up 20 acres of Kent ancient woodland. It's been a great demonstration of what private ownership nature conservation and private crowd funding via social media can achieve by 'going it alone' , taking a passionate personal lead and then integrating that lead into existing effort (e.g in Brazil they have bought land that is now integrated into the REGUA project) and emerging global digital systems (Ebird, Inaturalist, Irecord, Facebook, Twitter, Apple, Google etc etc).
So basically its about taking a strong personal lead  (not just paying subs or volunteering), zoning out all the noise of the collapse, resistance to change, endless drivel of middle managers and scavenging within traditional nature conservation and pushing in the direction of travel of the advancing community and emerging systems. The great thing about Rachel and Lee's example is  that, Rachel is a sustainability officer and Lee is a freelance ecological consultant (so regular people of moderate means) and have clearly shown that 'anybody' (with the will and few thousand quid- its really not expensive) can do this - this is not millionaire led nature conservation such a Knepp or huge wildlife charity led- this is independent small scale nature conservation that can contribute immensely to solving the biodiversity crisis and one that puts individuals and independence at the centre- not trustees or boards of directors (and certainly not government conservation officers).  If everyone who could bought a private nature reserve instead of a second home (or first home and live on the reserve), time share, stocks and shares or holiday home that would be a perfect natural and economic capital investment (and would stimulate a degree of speculation in that market too). So this could be a great time to get in on this, already woodland is increasing in price as more people buy woodland for family projects and carbon offsets etc. An era of private nature conservation (not just corporations but also individuals) that compliments and interconnects the existing nature protected network is well and truly emerging/escalating. Certainly firing me up to keep saving up and looking for our family 10 acre nature reserve that we are aiming for.
So it was with great excitement and pride (to be friends with these pioneers!) that we all met up (Lee, Rachel, Andrew, Sue and I)  at their 20 acre woodland in Kent (Southroad Wood) to start some entomological recording there.  It was great night with BBQ and Pimms and we set up five moth traps (I discovered I can run at least 3 traps from my generator) . I slept in the campervan which was perfect as could drive in to the heart of the woodland. Presumably because of the drought it was pretty quiet on the moth front but 51 species was a good start for the moth recording there. Black Arches was the most abundant species.
All decent photos below by Lee Dingain and all the not so good photos by me.

Musotima nitidalis- we had five of this Australasian adventive which feeds on bracken.  A lifer. 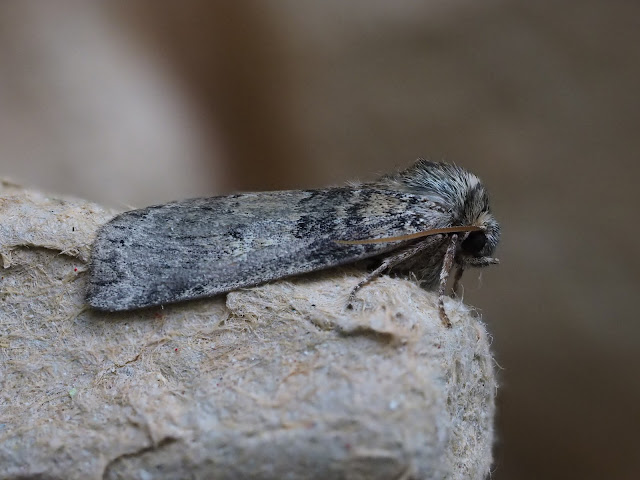 Oak Lutestring - a lifer. Check out the quality of Lee's images here- I really need to get a new macro set up.

The closest I can get to this is Satin Wave, if correct also a lifer. Update 080822- this is a Small White Wave (thanks UK Moths Identification Twitter). Still a lifer :-) 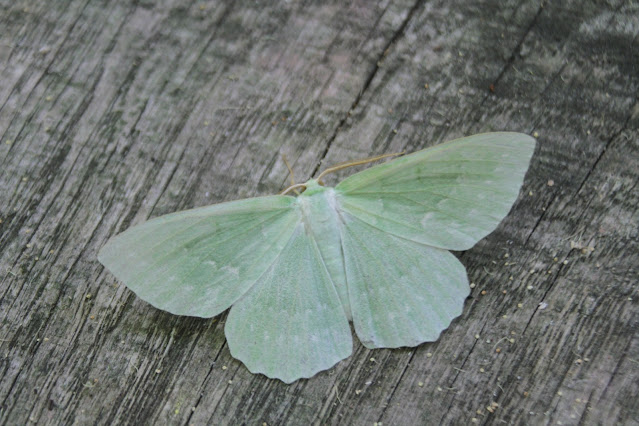 Large Emerald- we had a few of these magnificent moths

I've been checking for a Langmaid's Underwing all autumn but all the ones I've checked in Bucks have been Lesser Broad-bordered Yellow Underwings. All the ones we checked here looked different to the ones I've been checking (with small orange areas to the hindwings above)  but perhaps because its late in the season the underside of the upperwing looked like dark edges (below image, couldn't see the diagnostic dark right angle and dark edge for Langmaid's). Maybe the detail has been lost with wear? We decided that they were presumably worn Langmaid's? Will be a lifer if correct. 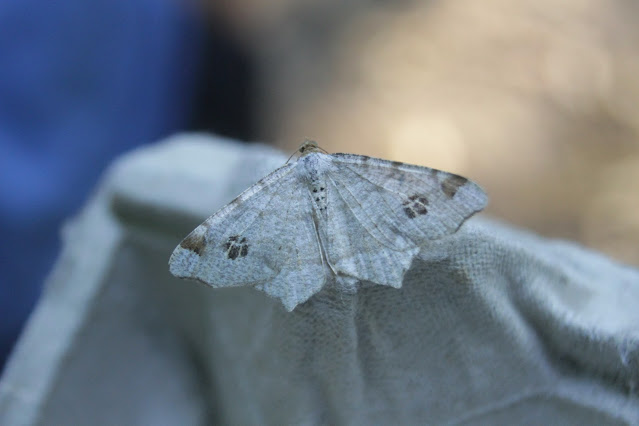 Peacock moth- quite a few of these too 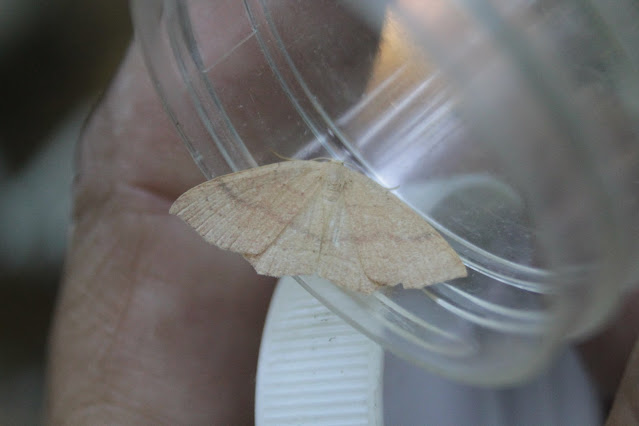 We went for Clay Triple Lines on this

Looks like Hypatima rhomboidella- another potential lifer (if cleared by Irecord) 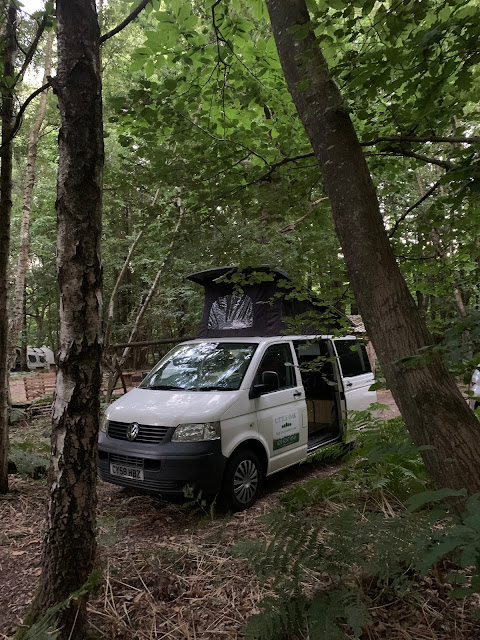 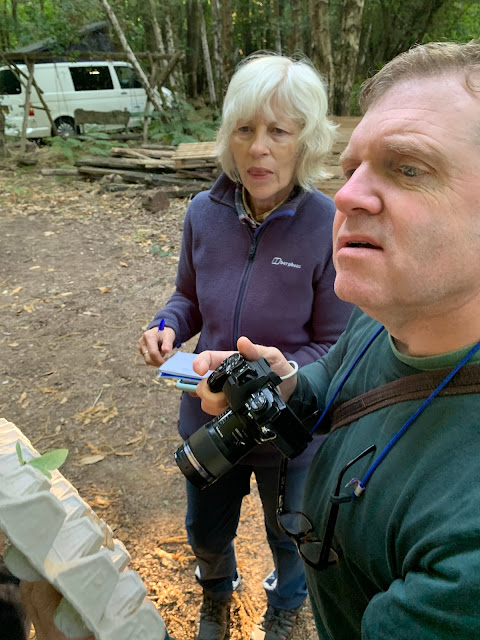 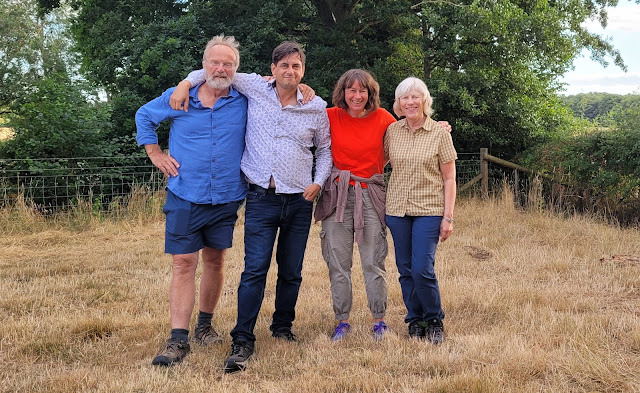 The Southroad Wood Moth Team
Posted by Peter Alfrey at 11:07