A quick update on the Old Vic fronts.

Birds: 74 species for the year now Ebird year list here , with up to 30 species a day at the moment. Not much happening as expected for this time of year, more young birds appearing including the first young Greenfinches, a couple of Skylarks have moved into fields within sight of the garden now, Spotted Flycatcher prominently 'singing' again and been hearing the Tawny Owls calling again at night.

Moths: Now on 248 species for the year (528 for site) the recent highlights including Dark Sword Grass today, a Clouded Brindle and just a great selection of summer moths (approx at least 60 species of 100 moths on an average night).

Mini-farm: Harvested the first Strawberries, potatoes and broad beans this week and also a load more Rhubarb. The garlic is also ready and now drying out.  The Light Sussex/Isa Brown chicks have outgrown the first brooder so we've moved them into a bigger brooder (Jacob's old travel cot).

Wildlife Garden: A few more plants have gone into the butterfly border including Flox, Buddleia and Red and White Valerian.

Mini-zoo: The Yellow-bellied Toad escaped from the Paludarium but luckily we re-found it and seems okay. Added Yellow Labs (another African cichlid) and a Convict Cichlid to the Mbunas, Mollies and Weather Loach in the Paludarium. Need to update the species list now as also added several new tropical and aquatic plants. 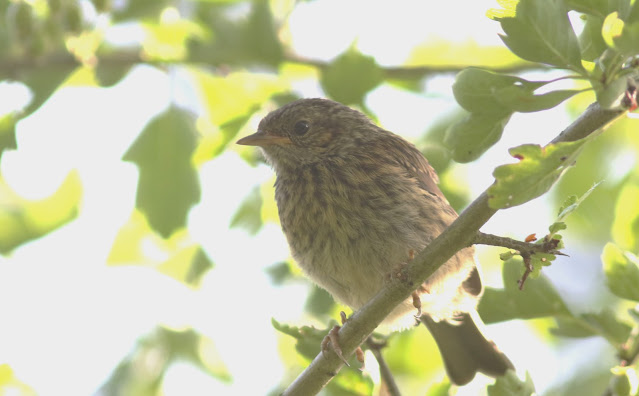 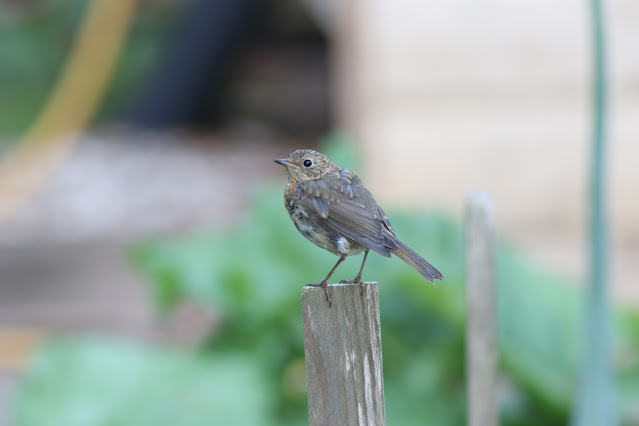 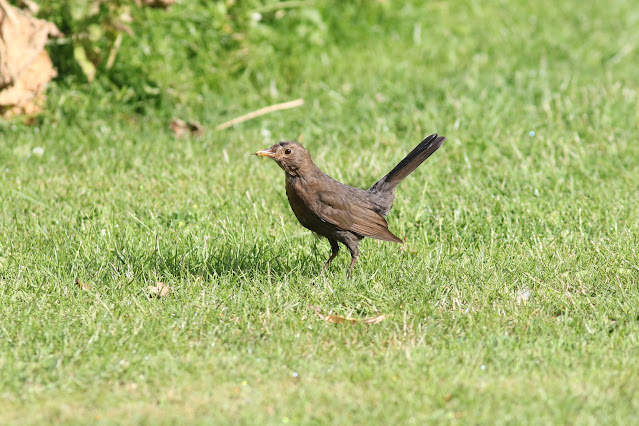 This female Blackbird worked out that I've been releasing the moths in thick undergrowth after processing so I've had to resort to what I understand a lot of moth recorders do which is keep the moths during the day in shelter and then release them somewhere safe at dusk before turning the trap on to make sure they disperse widely first. 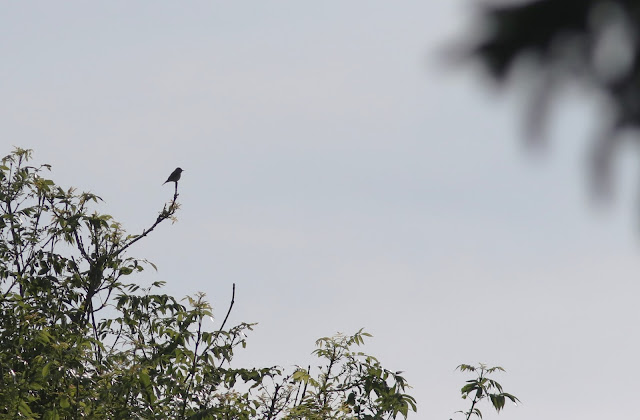 A constant sight and sound at the moment (after being elusive for a while). Lucky to have garden Spotted Flycatchers. At least one this morning but possibly two. Ebird checklist from this morning here 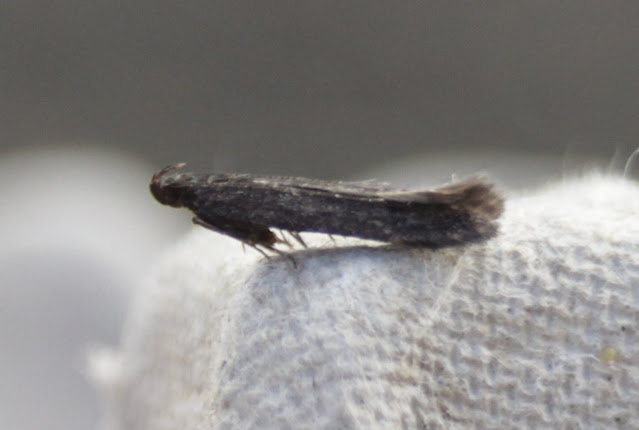 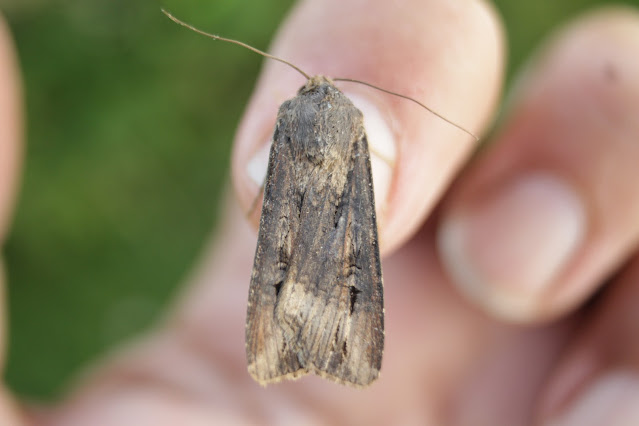 I love getting migrants here. Seems like a lot of migrant activity this year across the country with loads of Striped Hawkmoths, Scarce, Eastern and Bordered Straws, Vestals etc, mainly on the coast but unfortunately we're stuck in little league here where Dark Sword Grass (above) is a welcomed visitor. Also had a Silver Y this morning and a Delicate last week plus quite a few Diamond-backs and possibly migrants in the form of Angle Shades and White-points.  Despite not getting many quality migrants seems like being 'stuck' inland is not so bad for things like abundance, diversity and also dispersal in entomology (the Small Black Arches was brilliant last week- quick tangent, a reminder of the limitations of social media validation as the best thing I've seen all year got one like on twitter where if I put a picture of hawkmoths on social media it can get 10% validation from my friends/followers proving in this instance that there is sometimes little correlation between scientific value and populist value/validation). I would love to move to the coast one day (that's the long term plan) but in the meantime trying to focus on any advantages of being landlocked which seems to have more going for it entomologically with many localised species found in non-coastal habitats. Really need to make the most of the fate of being landlocked as looks like no chance of moving to the coast yet for several years yet (so not much chance of any quality migrant moths) so like Jo the Cabbie said to me a when our campervan broke down in Wales and her friend lost his leg in a work accident 'Embrace the disaster' . 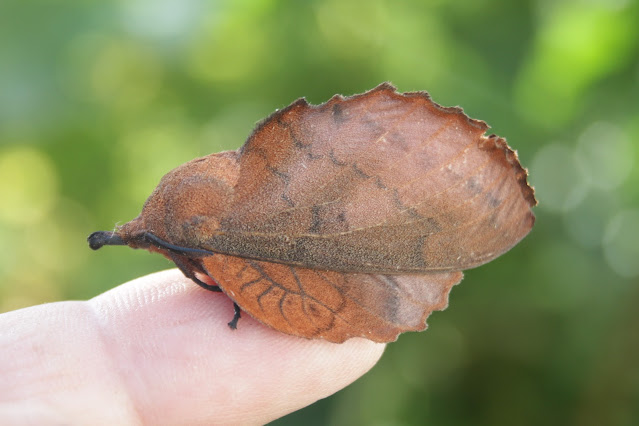 Lappet- never get tired of these beauties 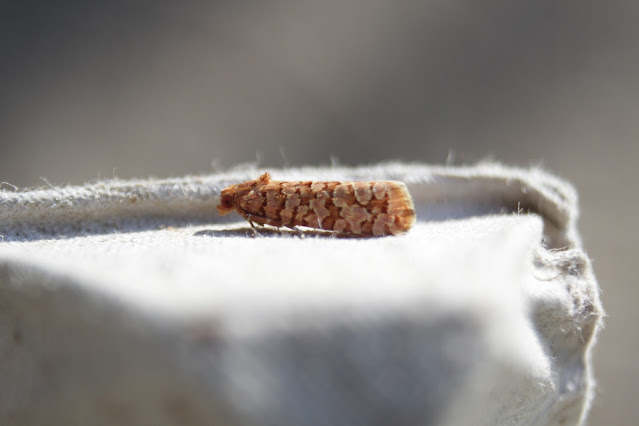 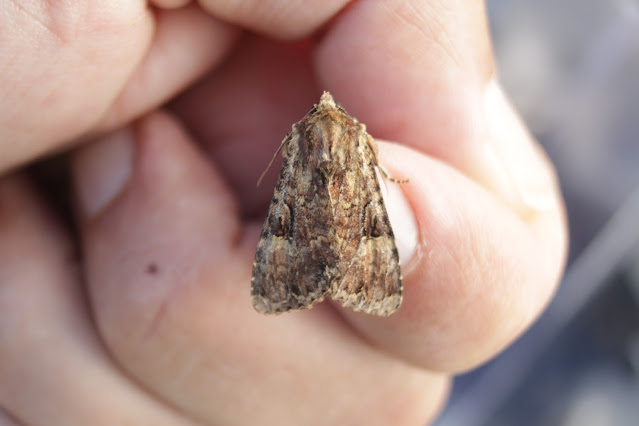 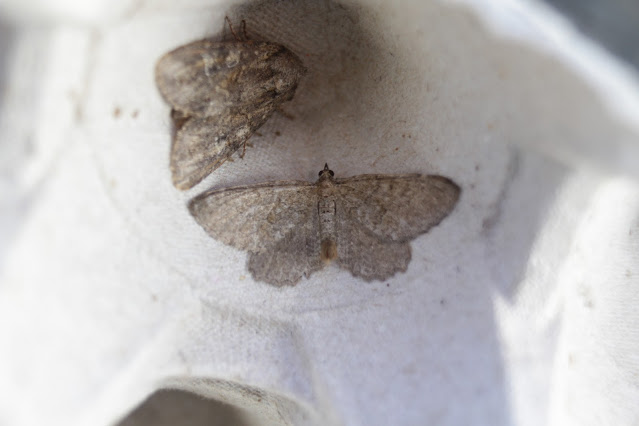 Brown Scallop- don't get many of these 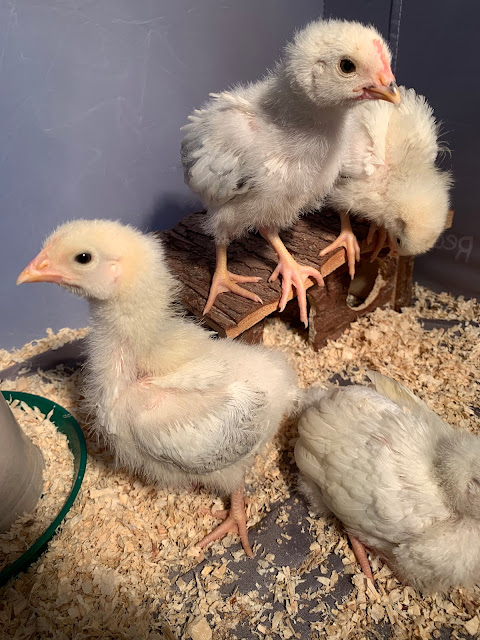 Three weeks old, interesting to watch the feather development with the wing coverts first, then the primaries and now the down is being replaced on the scapulars. Can't confidently sex them yet and also still need to wait to see whether they are pedigree or hybrids (the fertilised eggs were from a cock Light Sussex and a mix of Isa Brown and Light Sussex females). It's still a week or so away before we can introduce them to the outside but they outgrew the first brooder so moved them into Jacob's old travel cot (below) and also started to introduce some chick weed into their diet, eventually we want to feed them on mini-farm produce/ excess/weeds etc. 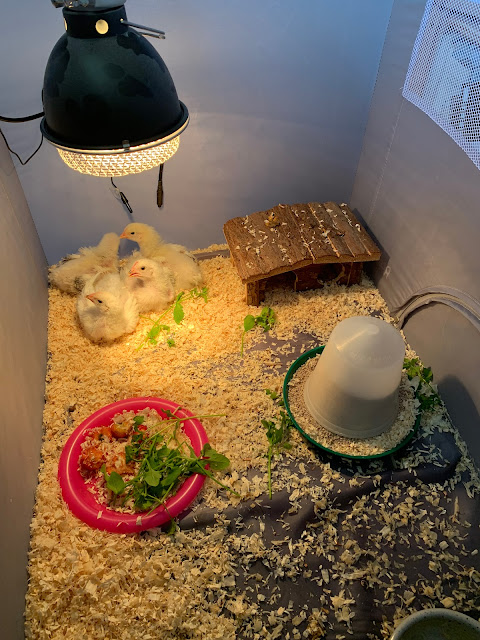 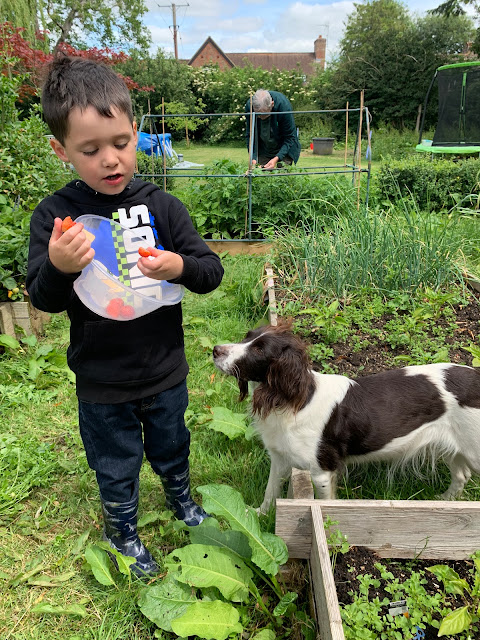 Jacob helping out harvesting the Strawberries and Potatoes (above and below) 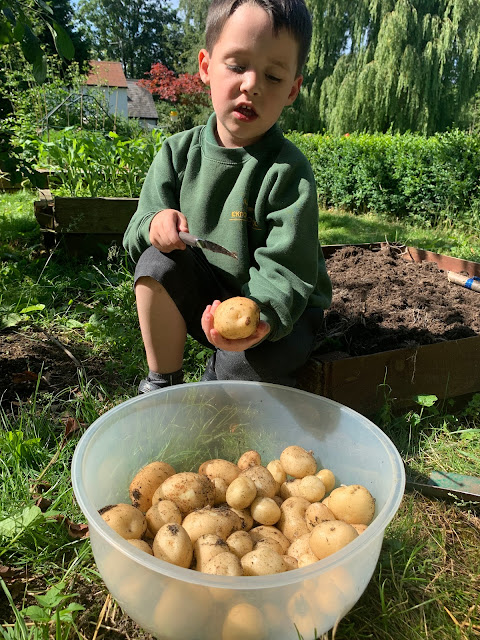 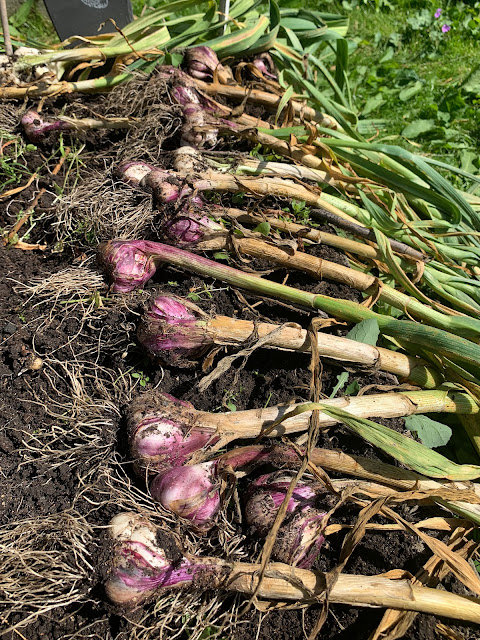 The Garlic has been pulled and looking pretty good 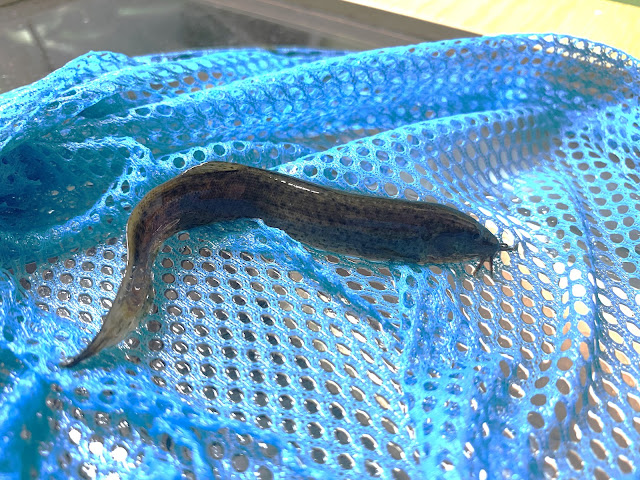 Strangest task of the week was trying to get this Weather Loach to fart. The back of it's body kept drifting up so I googled it and the internet said I needed to take it out of water so it could expel excess gases in it's secondary swim bladder (I've been enjoying using Google and You Tube to learn how to do the mini-zoo and chicken rearing- a bit late to the party I know but this is the first phase of self teaching I've done without any reference to books at all). Seems to have worked , see video below (Weather Loaches can stay out of water for hours and during droughts burrow themselves in the mud).
Posted by Peter Alfrey at 13:58