Finally managed to get some okayish photos of the Siskins wintering in the garden. The bird feeders are now 'working' and I have slowly habituated the feeding birds to me sitting within a few meters of the feeders with the camera (was thinking of buying a hide but doesn't look like I'll need it). 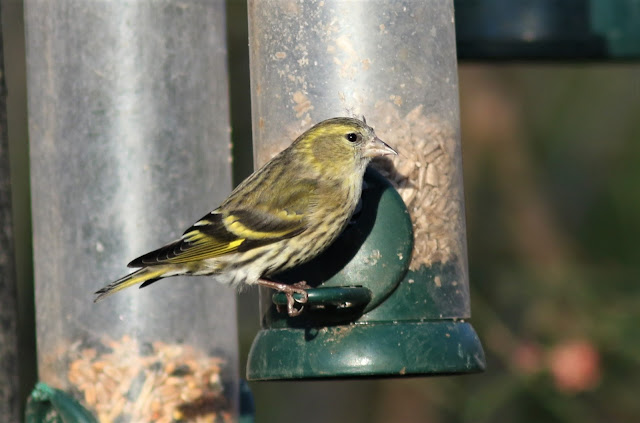 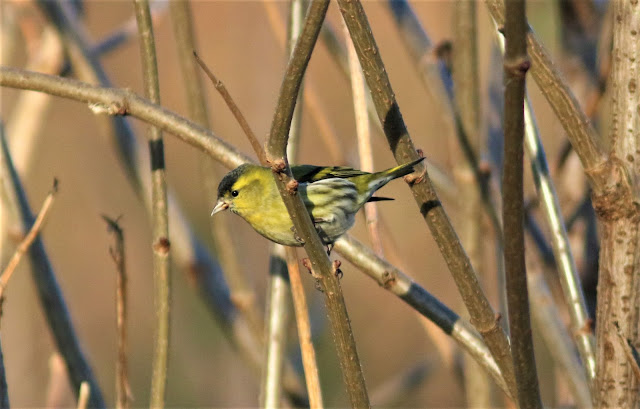 Adult male Siskin, in fresh plumage the cap has fine grey tips (rear crown). Unlike female the breast is un-streaked and yellow 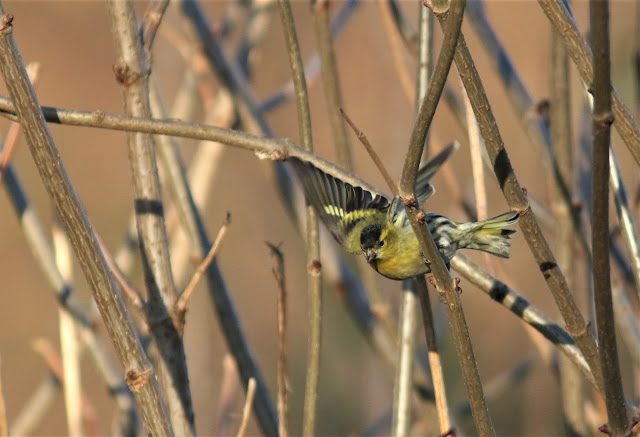 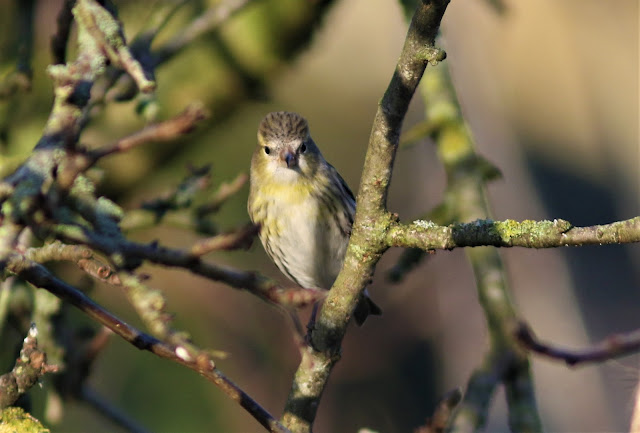 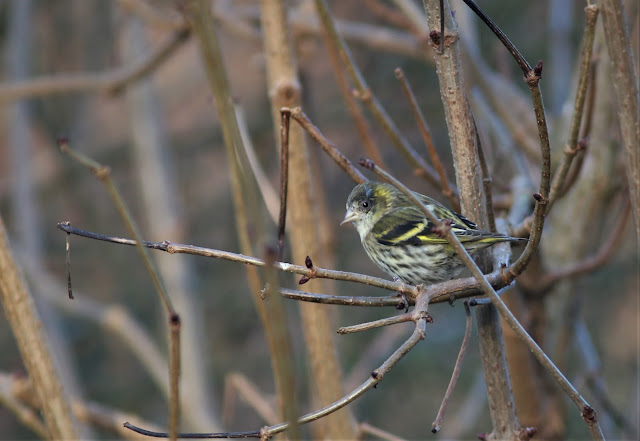 This is the same female as the first photo but the left side of the head showing either evidence of trauma or disease. The feathering around the eye is missing exposing the outer edge of the eye and presumably dark bases of head feathers are exposed creating a dark mask. Bird feeders can be a source of danger to birds- either as targets for Sparrowhawk attacks or places where diseases spread. Especially during this avian flu outbreak I'm changing the water everyday and disinfecting and cleaner the feeders regularly. I've also positioned this feeder with only one line of attack open to Sparrowhawks which leads into a funnel of Elders, this way the birds just need to check in limited directions and the Sparrowhawk also will have to launch attacks into a wall of foliage which should give everyone a fair fighting chance. 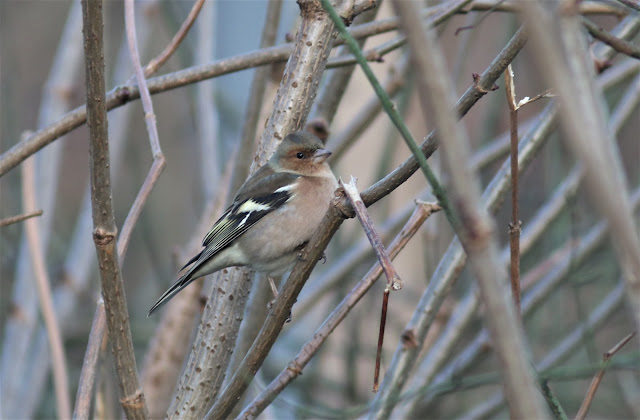 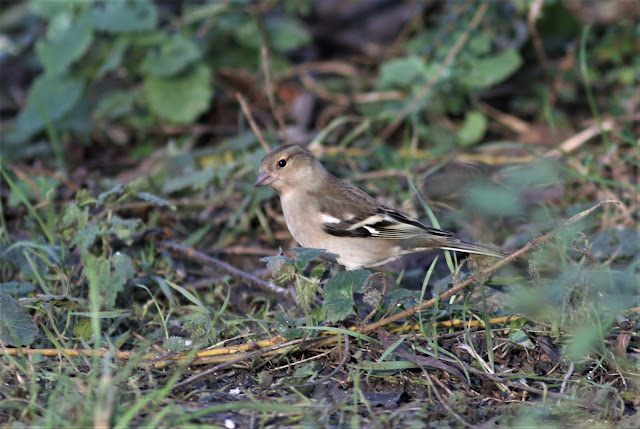 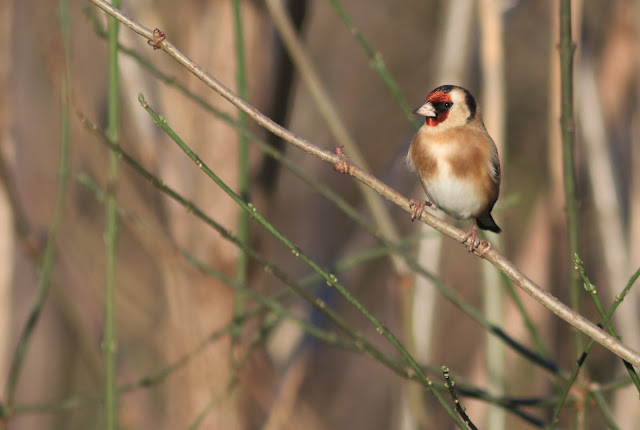 Goldfinch- up to 37 Goldfinches in the garden at the moment 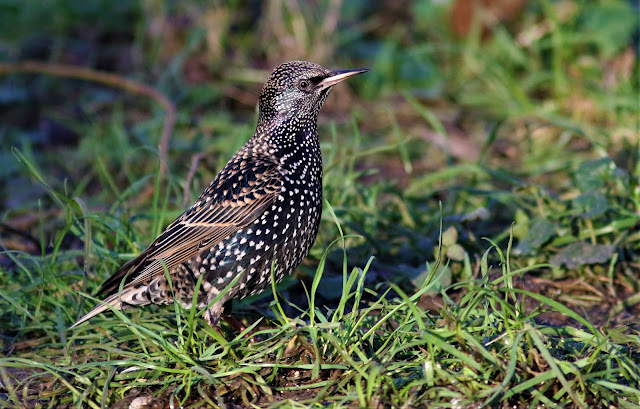 Starlings (above and below). A winter plumaged bird above (heavily spotted with a dark bill) and more summer plumaged bird below (plainer glossy plumage with a yellow bill).  Both young and adult Starlings undergo a complete moult after the summer so are not easy to age or sex apart from close examination of the tail and throat and breast spotting,  preferably in the hand. A prominent green gloss is indicative of an adult male in winter. Will have a closer look at these in future to see if I can work them out. 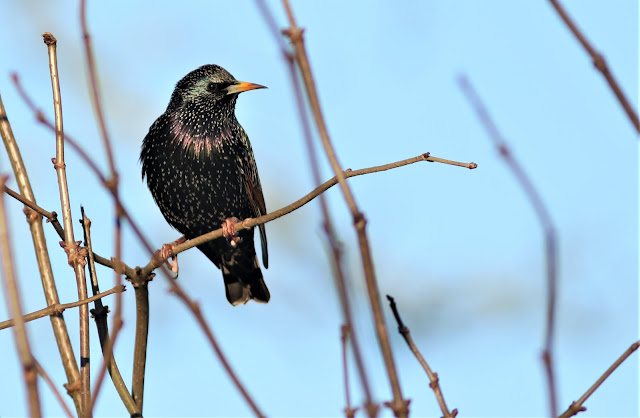 Summer males are supposed to have a greyish-blue base to the lower mandible and females it should be whitish. This looks more greyish-blue to me. There has been a lot of Starling song in the past few weeks and birds are already inspecting the holes in the Walnut tree. 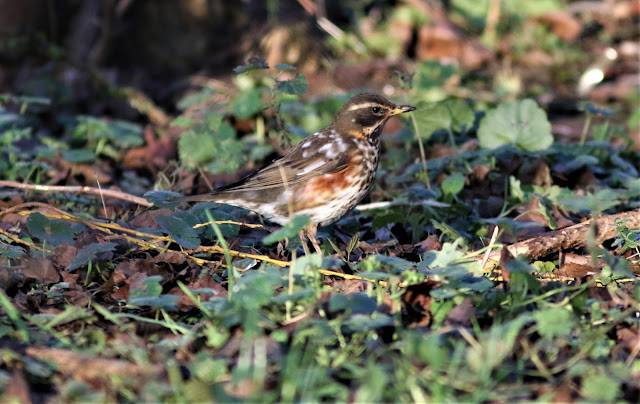 The partially leucistic Redwing remains loyal to the paddock area 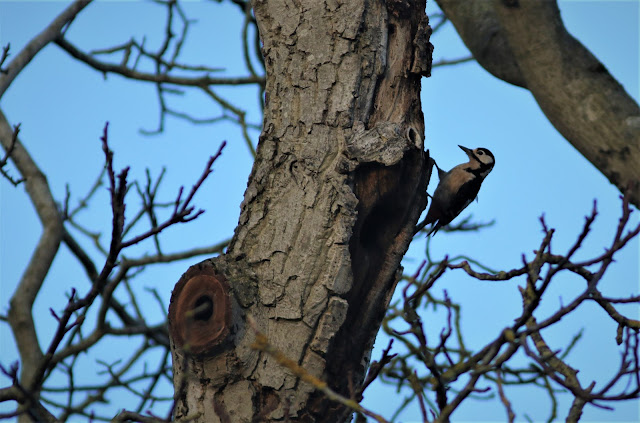 Despite it being January there appears to be a bit of pre-breeding activity going on. Starlings were inspecting holes and this Greater Spotted Woodpecker was having a look round the Walnut tree too. A distant Song Thrush has been singing recently (following a long quiet spell in recent weeks/months). Typically Great Spotted Woodpeckers have been drumming and Green Woodpeckers are quite vocal. Blackbirds aren't really singing much yet but Dunnocks, Wrens and Robins are tuning up regularly. I'll try and track all this  through the year in the garden and also try and get some figures on the numbers of breeding territories in the garden too. Should be able to do it all on the new Ebird hotspot for the garden HERE. I might re-brand garden birding to Ultra-low Carbon Birding, in the same way that Local Birding has been re-branded to Low Carbon Birding and then also in the same trend start trolling and judging everyone on the internet who doesn't do it and dares walk out their garden or cycles off on a carbon fibre bike,  rubber tyres or rubber soles on their feet, burning more carbon calories than if they just sat in the chair 4 meters away from the bird feeders like I'm doing. Evil planet destroying local low carbon birding bastards- ultra low is the only right way lol lol. Uber low carbon birding is when you just sit at window looking at the birds outside while on hunger strike with the heating, TV and lights off licking the condensation off the window to keep yourself alive.
Posted by Peter Alfrey at 21:25