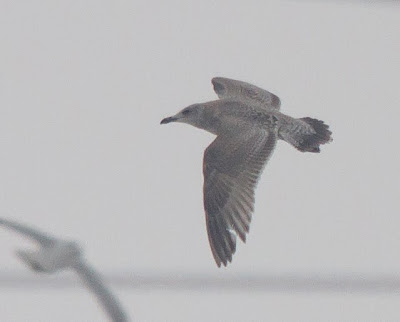 More pics here: http://peteralfrey.blogspot.com/2010/12/beddington-mystery-gull-december-2010.html
There were several features of this first winter bird that were anamolous and suggestive of some kind of Nearctic and also Glaucous Gull influence. These features included the extensively dark rectrices, the heavily barred upper tail coverts, the marbled tertials, the dark wash to the nape and underparts and pale tips to the primaries. It is quite possible that a bird showing these characteristics could be generated from Nearctic gull populations- perhaps something like a 2nd generation 'Nelson's Gull' (Glaucous Gull x American Herring Gull).

Thanks to Peter Adriaens, Julian Hough, Richard Millington and Brian Small for comments and links. The conclusions here are a personal interpretation based on comments.
Posted by Peter Alfrey at 21:15