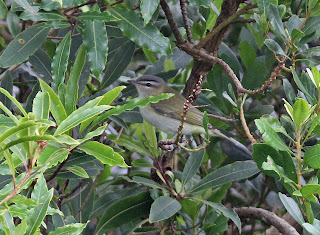 While waiting for the cab a Bobolink flew over the guest house. Then started the birding day by working Lapa with Darryl. We found a Red-eyed Vireo and 2-3 Indigo Bunting. 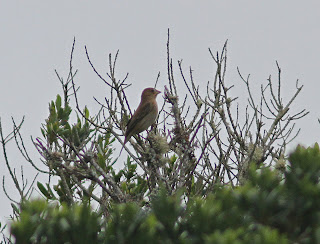 Indigo Bunting. One of two to three birds in the bottom of Lapa. 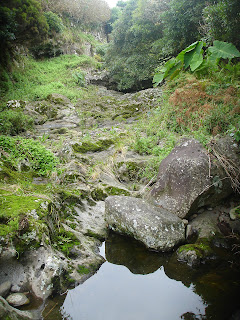 Lapa Valley.  We were working our way up this valley when news broke of a Magnolia Warbler in nearby Ribeira da Ponte. We hitched a ride with the SPEA guys and after a frantic few minutes we managed to see the bird. 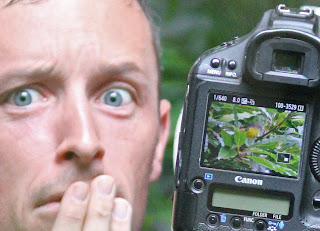 First pics of the Magnolia Warbler with Vincent Legrand. The bird kept flitting around in the upper dense canopy making it pretty difficult to get a good view. Eventually everyone managed to see it ( and despite the news getting lost in translation) 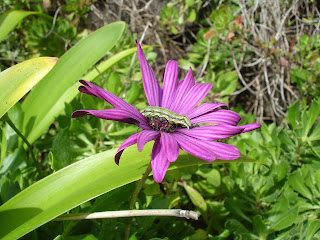 Spent the afternoon walking back to the village by which time the sun was out and it was a pleasant day. 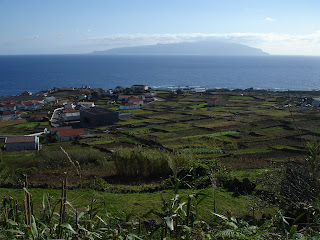 View over the middle fields towards Flores in the background 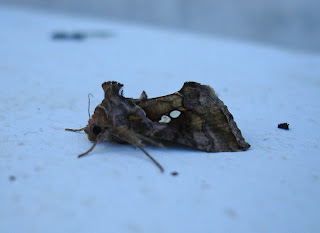 Then ended the day processing the moth trap contents from the night before. Quite a few moths I have no idea what they are. Is this one a Goldspot?
More Corvo moths here: http://peteralfrey.blogspot.pt/2012/10/corvo-moths.html

Close - I think it looks more like a Golden Twin-spot.

Cheers Chris,
Good luck with gripping off Darryl while he is away :-)

Struggling to do so at the moment, although I some how don't think that he'll really be that bothered by anything over here with all the birding that's going on with yourselves! I think that I know where I would rather be.