Saw a distant juvenile Sabine's Gull today on the Thames. Couldn't get any photo but I thought it was a good opportunity to have a look at the shots from Beddington's Sabine's Gulls last October- below. Three together on 9th October 2007- almost twenty years since the first and only other Beddington's Sabs,on the day of the great storm in 1987. 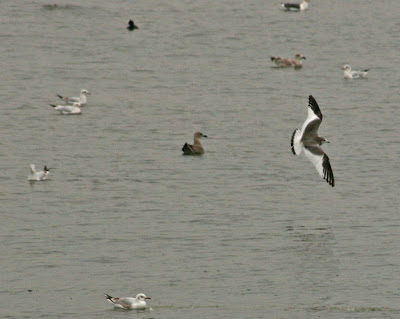 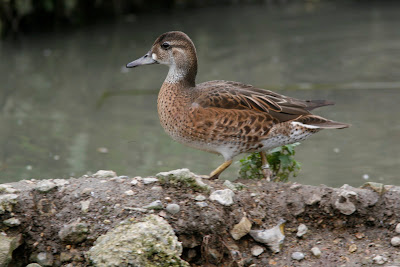 A captive female Baikal Teal- there is little chance of this small London population of Baikal Teal escaping and colonizing. Nonetheless there are Baikal Teals in London, albiet brought here (and restrained) by another 'animal', but in the past, this practise has proved to be an effective ultra modern (in geological terms) method of range expansion for various species (Ring-necked Parakeet, Ruddy Duck and Mandarin etc). Nature often finds 'new ways'- totally accidently yes but no less a 'new' process of range expansion. 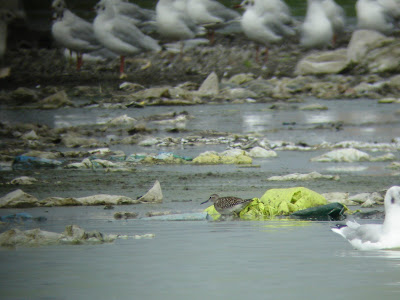 Juvenile Wood Sandpiper on the enclosed lagoon (looks like India with all that rubbish)- reacting to a hunting Hobby-crouching and avoiding taking flight. 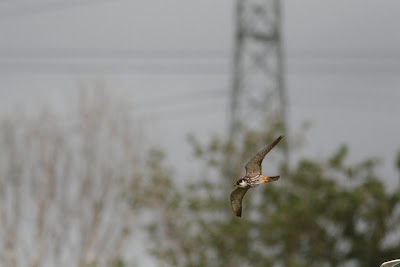 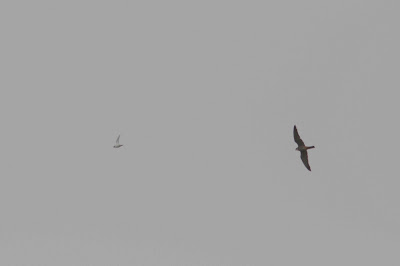 A juvenile Ringed Plover being chased by a Hobby. By making a low rapid sweep over the lagoon, this predator is attempting to spook something into the air and then swiftly sieze it in flight from below. If the strike it not immediate, the chase climbs to high altitude, with the Ringed Plover attempting to stay above the Hobby. Several unsuccessful mid air rapid drives by the Hobby, countered by rapid micro changes in direction from the Ringed Plover led to the Hobby giving up. 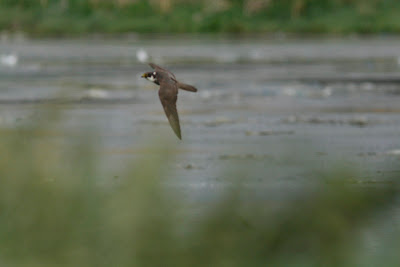 The characteristic two white spots on the side of the upper neck are clearly seen here, a feature of all plumages. 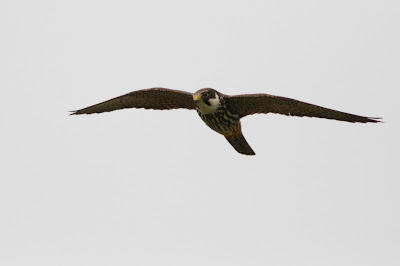 The yellow orbital skin is a feature of an older bird- it is bluish or greenish yellow in juveniles. The contrast in mantle and upperparts colours compared to the remiges, with the abraded remiges and orange trousers suggests this bird is neither a juvenile or an adult. These features combined with the tail pattern ages this bird as 2nd calender year autumn. The distinct bars and pale tip (visible in upper photo) are a feature of juvenile feathers- an adult would have less distinct bars with no pale tail tip.

Hobby migration is a bit of a mystery. Birds are numerous in the savanas of Zimbabwe, Zambia, Malawi, Botswana and Mozambique during November to March but records are not common in West Africa. There is a lack of concentrations over migration bottlenecks so presumably Hobbies migrate on a broad front at considerable height.
The Hobby is one of 149 taxa, 61 species and 10 genera in the family Falconidae- which is divided into the Polyborinae and Falconinae subfamily. Hobby belongs to the genus Falco in the latter sub-family and there are four Hobby species in the world- Eurasian Hobby, African Hobby, Oriental Hobby and Australasian Hobby. South and Central American counterparts include the Bat Falcon and Orange-breasted Falcon.
1 juvenile Knot still present, 4 Ringed Plover, 1 juvenile Wood Sandpiper, 4 Common Sandpiper, 4 Green Sandpiper, 31 Shoveler, 15 Teal, 1 2nd cy Hobby, 15 Pied Wagtail, 40 House Martin, 1 1st winter Wheatear, 25 Little Grebe, 1 Great-crested Grebe
Posted by Peter Alfrey at 12:39 No comments: 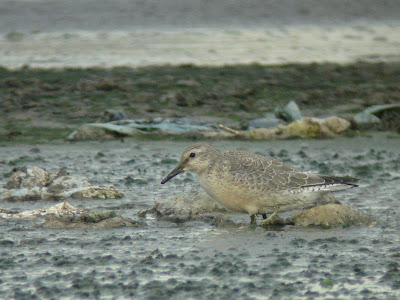 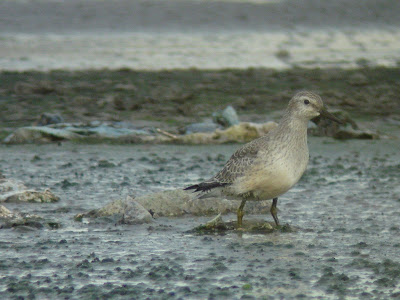 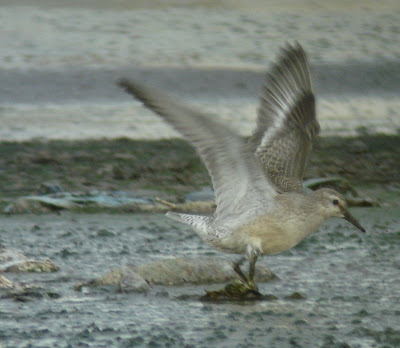 Highlight of the day was a juvenile Knot on the enclosed beds accompanied by the four Ringed Plovers, one juvenile Wood Sandpiper and 5 Common Sandpiper. Of the 19 records of Knot (this one the 20th if there were no records in 2006-7) at Beddington (before 2005), August has proved to be the peak month with four records (this is now the fifth August record).

According to HBW there are five sub-species of Knot, C.c canutus (CN Siberia), rogersi (Chukotskiy Peninsula south to Australia), roselaari (Alaska), rufa (Canadian low Arctic) and islandica (islands of Canadian High Arctic and N Greenland). The main population which winters in W Europe is islandica. However canutus may pass through the UK on the way to their wintering grounds in Africa and some may halt in W Europe. So this bird is presumably islandica but could be canutus. Canutus generally congregate in the Wadden Sea before flying non stop to Africa. The vast majority of Knot in the UK are islandica.

Well if this has come from Greenland or Canada, than that means maybe the Ringed Plovers did too- so not safe to assume they are from the northern european populations, which seems logical to assume. Adult islandica are more spangled on the upperparts with less intense red colouration below. However this juvenile plumaged bird is presumably inseperable. It would be very interesting to know, which race and thus where this bird originated. Either way- Russian, Canadian or a Greenlander- it is pretty amazing that is has found its way to a pit of human excrement in London.

Knots are famous for epic journeys including single flights of over 5000km. The Wadden Sea is very important in this birds ecology as a major staging and moulting area. 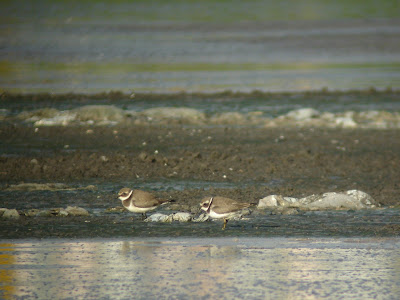 Juvenile Ringed Plovers
A fairly regular visitor to the farm this time of year (August is the peak month).

Of the 30 members of the charadrius genus in the world, there are three species which have been recorded on the farm. The Ringed and Little-ringed Plover and also one of Beddington's classic vagrants- Killdeer. A Sandplover, Kentish Plover or a Dotterel would be a welcomed addition to the Beddington List.

The two races of Ringed Plover comprise firstly nominate hiaticula (Taiga) which breeds in Svalbard, Southern Fennoscandia south to Brittany and west to the eastern coast of Ellesmere and Baffin Islands. The second race, tundrae (Tundra) breeds from northern Fennoscandia and Russia.

Tundra winters in eastern and southern Africa but a vagrant is a possibility. Presumably these birds at the farm are nominate taiga.

Leap frog migration is a feature of Ringed Plover migration, with birds breeding further north, wintering further south. It is therefore possible that this family party of Ringed Plovers are either fairly local birds going to the south coast or they could be on their way somewhere more distant. Birds that breed in the western northern Atlantic carry the longest migrations (mainly through the Irish sea) to West Africa. 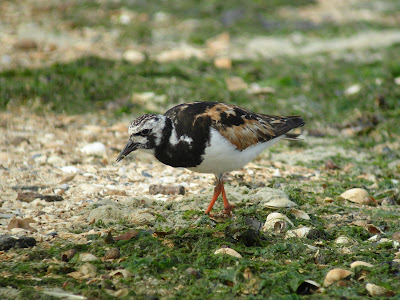 Adult Turnstone- the only other Arenaria in the world is Black Turnstone which a nearctic west coast speciality. 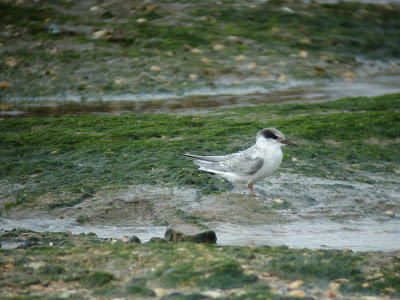 Juvenile Little Tern (above and below) Canvey is well known gathering area for autumn Little Terns. Over the weekend numbers doubled from 30 on the 16th to over 60 on the 17th. Also nearby there were reported arrivals of groups of Black Tern and Curlew Sandpiper at Tilbury. At Canvey we also noticed an arrival of Grey Plover and Knot. 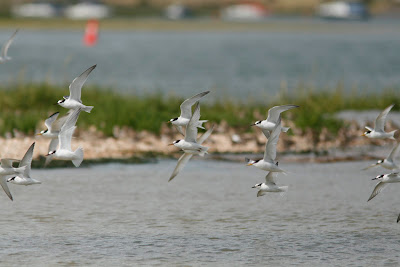 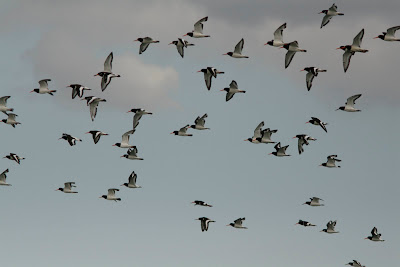 Oystercatchers- predominately adults showing varying degrees of wing moult. Always on the look out for an American Oystercatcher in the flocks of 500-1000 roosting at Canvey. Oystercatchers (Haematopodidae) are cosmopolitan (marginal in Africa and Asia) but absent from polar regions. There is one genus in the family, 11 species (Canarian Black Oystercatcher extinct) and 16 taxa (HBW). 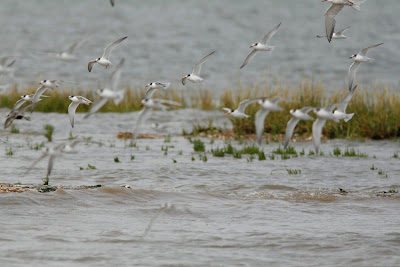 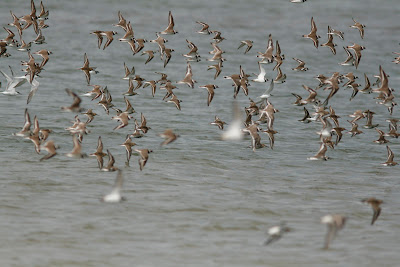 Ringed Plovers, Common Tern and Dunlin. Interesting to see the variation in wing moult in some of these birds. 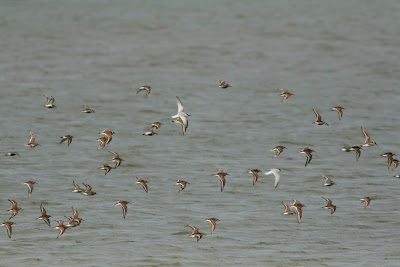 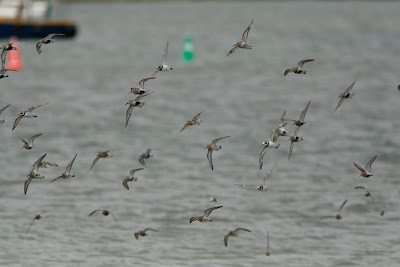 Dunlin and Ringed Plover. Always tricky assigning both Dunlin and Ringed Plover to race so I usually don't even try. This time last year Simon and I found a White-rumped Sandpiper at this site. The Thames has a long history of vagrants including, on the Essex side: Western Sandpiper, Baird's Sandpiper, Solitary Sandpiper, Sociable Plover, Collared Pratincole, Black-winged Stilt, Greater-sand Plover, Broad-billed Sandpiper, White-rumps, Marsh Sandpiper, Cream-coloured Courser. The Kent side, including the Swale and Sheppey have an even more impressive list of vagrants.

Little Tern- a Canvey classic. Flag-ringed birds recorded at this site reveal that some of these birds originate from Belgium. Black-tailed Godwits (islandica) (above)- these birds originate from Iceland and winter in western Europe. The Oare birds mainly arrive in July and numbers build in early autumn. Later on in the autumn/early winter some birds move to the south coast of Britain (e.g. Langstone Harbour or Bowling Green Marsh), with some moving even further south (to Iberia). On the return to Iceland leg, some birds stage in Ireland before they return to the breeding area. The detail of migration reveals that birds movements are often complex, involving various loops and networks of staging and wintering sites. Juvenile Avocet (above). The brown wash on the scapulars and tertials, and the brown hue to the dark plumage indicate that this bird was raised this year.

Surpised to see only 3 Dunlin. There is usually a sizeable flock of Dunlin here. Perhaps they are using another roosting site on the Thames Estuary.

Posted by Peter Alfrey at 10:51 No comments: