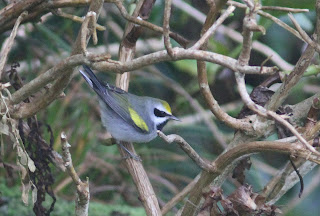 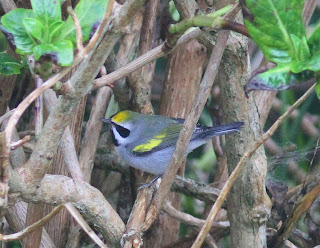 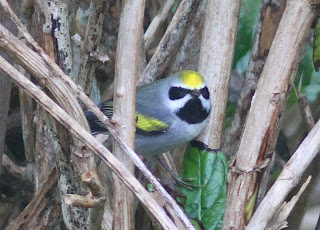 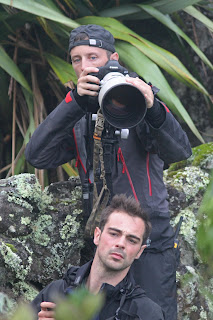 Vincent getting some much better shots than mine (Jens Hansen found the bird and Josh Jones, here with Vince, refound it for us all to see)
Dreams as a rule do not come true despite what X-factor says. However there are exceptions to all rules and today was one of them!
We were in Fojo when the news broke so had to climb our way out and then luckily hitched a lift with a farmer. Then there was a four hour search, in which Pierre found a Black and White Warbler (and also ripped his trousers in half), Tommy found a REV and a Cliff Swallow flew over. The weather started to deteriorate with heavy rain and wind lessening hope but then it eased up a bit.  Just as we were concluding that the bird must have moved on from the original place, Stew thought he saw a Bittern land up valley so Josh went looking for that and in doing so re-found the Golden-winged 200 meters up valley.
The run up the valley was exhausting and there was blood and tears by the time we saw the bird. On seeing the bird Richard declared 'now I can die' and collapsed :-) Then the 3 mile walk back to the village on already swollen knees but completely worth it.
Great bird.
Posted by Peter Alfrey at 12:49

What a stonker! Brings back memories altho the settings for this one would be preferable but back then beggars can't be choosers.......