Did a few hours at Otmoor today. Highlights included Hen Harrier, 3-4 Marsh Harriers, good numbers of winter thrushes on Morleys and a few Stonechats. My rarity drought not only continues but has quite remarkably headed even further south as I was hoping to see the Red-breasted Geese that have been around for a few days (presumably the same ones that were in Essex last week HERE and appear to be given the benefit of the doubt by Birdguides HERE) and once again failed in my quest. This is the longest run of bad luck in birding I can remember, a Black Patch as opposed to a Purple Patch.  Dipping potential plastic is a new low.

Meanwhile back at the Old Vicarage its been pretty static, the odd Winter moth on the side of the house, a small flock of Siskin still around. Weekend family stuff included a visit to the Falconry centre at Millets Farm. Steppe Eagle,  Black-shouldered Kite, Laggar Falcon and about 30 other raptor species have now been added to my list of the curious captive species lurking in Oxon/Bucks. 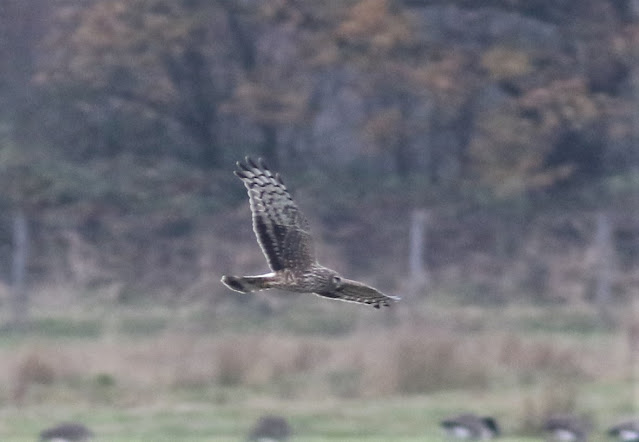 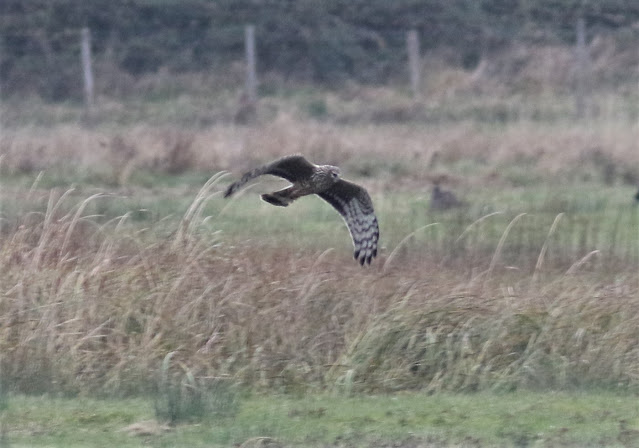 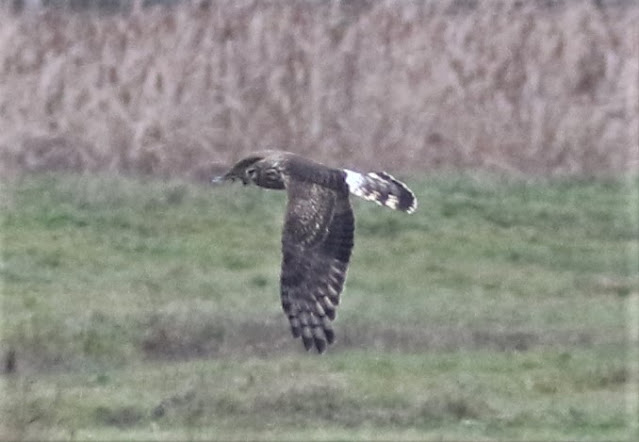 'Ring-tailed' Hen Harrier. Better photos and videos of presumably this same bird HERE and HERE. Not entirely sure of the age or sex of this bird but there appears to be a moult contrast in the secondaries and certainly appears to have heavy blotching/marking on the flanks and under tail coverts. In the linked photo, the bird clearly has a yellow eye which in a juvenile would indicate a male but the wide secondary trailing edge bar (which surprisingly tapers into quite a narrow dark edge on the inner hand) and the rufous dense markings on the underparts and auxiliaries are more older female features so my best guess is that this is non-juvenile female. The tail seems like a moult contrast in it too.  Would really need better photos and expertise but at a push I would guess a 2nd calendar year or older female. Barring in the primaries (from above) is also a feature of older females.  Comments/correction welcome. 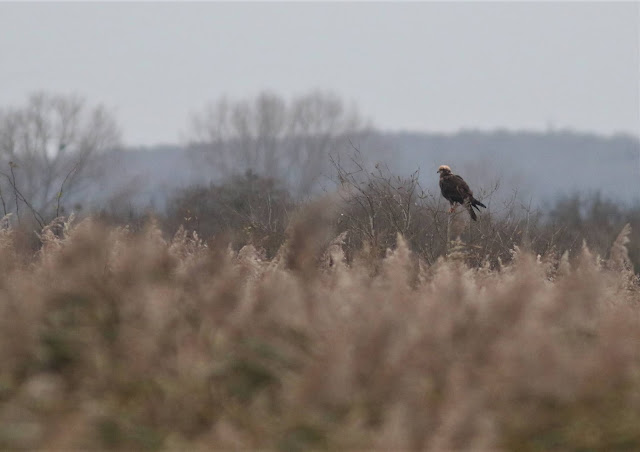 One of three to four Marsh Harriers today 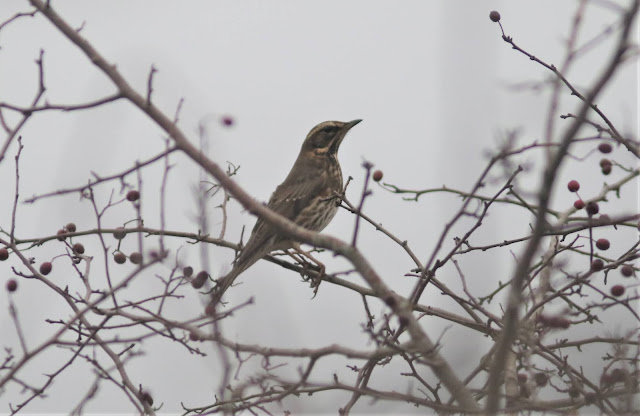 Redwing- good numbers on Morleys and also in the hawthorns on the roadside verges on the journey. 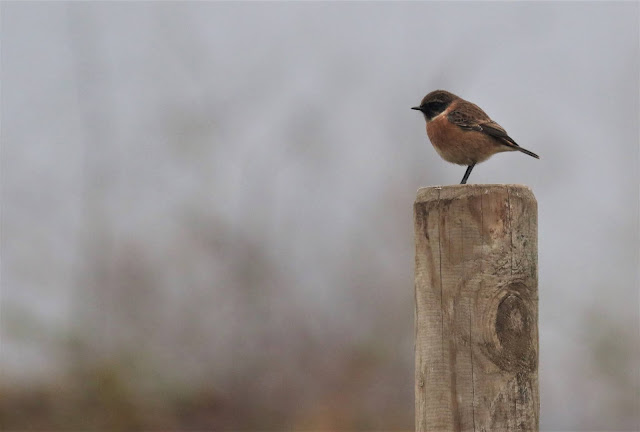 Must be winter, flocks of Wigeon are back on Big Otmoor
Posted by Peter Alfrey at 21:29

The RB Geese have been seen at the same time and days as the two have been seen in Essex so can't be the same birds. Unfortunately "our" Otmoor pair won't be accepted. Apparently Brent Geese are the usual carrier species for RB Geese and not a mixed bag of five Barnacle Geese and a Greylag.

Thanks for clarification Nick. Interesting. What's going on here then? I've not noticed reports of pairs of Red-breasted Geese roaming the country in the past. Know of the odd one in Essex etc. Have asked Birdguides for any more info so will see if anything comes back.

Update on this: Including a 3rd bird in Oxon at Port Meadow that then moved to Island Barn in London there are five birds involved in this mini-influx which are presumed to have come from the Netherlands where there are feral populations of Red-breasts that have abmigrated with Barnacle Geese. (Cheers Ed!)
Just read up a bit about the Barnies from the Netherlands too. Apparently there were three distinct migratory original populations of Barnies in Europe- 1) NE Greenland breeding and wintering eg. Islay 2) Svalbard breeding (staging in Norway) and wintering in Solway Firth and 3) Russia breeding (Novaya Zemlya and Vaygach islands) and winter in Barents Sea, Baltic and North Sea between Germany, the Netherlands and in hard winters UK.
Apparently according to EBBA2 there has been a rapid expansion of the Barnies in the Netherlands sourced from breeding birds in the Barents Sea (re-stocking has been confirmed by colour ringing) which have formed a partly resident population. There are about 16-22,000 pairs breeding in Netherlands now. The UK feral population is known to have originated from escaped birds.
So by sounds of it not much chance of the Red-breasts being wild but if they have come in with Barnies from the Netherlands the Barnies might be 'wild'. Who knows?

Not sure whether I would diss Barnacle Goose as a carrier, especially the Eastern flyway. I did fieldwork in Sweden for about a decade in the late 90's early 00s, particularly on Gotland in the Baltic. This was at the time that the Swedish breeding population, centred on Gotland, but sourced (as for Netherlands) from wild birds that originally migrated further North, was rapidly expanding (and providing food for WT Eagles - some of which specialised on geese). It was also a staging ground for Barnacles going on to Novaya Zemlya - numbers 10,000+ from mid April to mid May. Most years we would find 2-4 RBGeese among these; I think they were always considered wild. Mind you, there was also the occasional Ross's Goose in with them!

Just to comment on this, I'm not sure about the ID of the Port Meadow bird as the observer in question is not familiar with RB Goose at all and certainly their description didn't sound like one.

It's funny that RBA have not mentioned the Oxon birds at all, even in their weekly roundup where they used Jason's video of the Otmoor birds!

All very interesting especially the presumed wild Red-breasts getting in with the wild Barnies. I had another look in EBBA2 and no feral Red-breasted Geese breeding in Netherlands (no mention of this species at all in EBBA2 so no feral populations anywhere in Europe). So if no feral birds in Europe its either a mini-influx of escapes (a break out from somewhere.. but no rings) or... wild birds?? As an aside there are feral populations of White-fronted Geese in the Netherlands (that formed from escaped hunting decoys), feral populations of Cackling Goose and also Bar-headed Geese (so numerous that subject to eradication programmes)which I knew nothing about. Not much mention of the Oxfordshire Snow Geese either (which clearly are breeding somewhere as sometimes juveniles present) in EBBA2 (although looks like a dot on the map in the right place) and I also couldn't see a reference to them in latest BB rare breeding birds. Apparently there are breeding Snow Geese in Yorkshire and 100 odd birds in Germany so not sure if the Oxon birds are coming from those areas?

I was told that the Oxon Snow Geese are 'owned' by a farmer somewhere near Cassington.