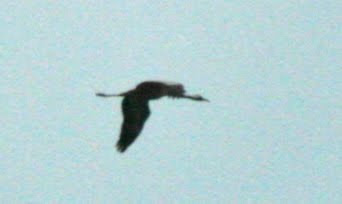 What a rather interesting day that was. It started at 0430 (that's am) with Roger, Paul and I leading 45 people on a dawn chorus walk. 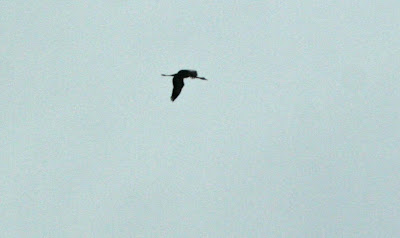 There was a Nightingale singing on Hangman's Bridge yesterday but unfortunately it cleared off in the night. However plenty of other songsters including 4 Lesser Whitethroats along the track. Then after breakfast it was back to our stations for the Beddington Big Day- a dusk till dawn vigil aimed at seeing as many species as possible within a day.
Despite the southwest winds there were a few migrants including female Whinchat, 1-2 Wheatear, 3 Yellow Wagtail over, 1 Common Buzzard and an influx of hirundines including 100+ Swift. At around 1500 I went back to the obs for a coffee. I thought I would keep an eye on the sky for any fly over migrants so went to the window for an obs watch. I looked to the north and saw a giant bird approaching and immediately ran for my camera. From the splayed out fingers and flat wings I knew it was either a stork or crane so took a couple of shots, binned it- saw it was a bloody Common Crane and quickly phone Johnny who was with the others on the dawn to dusk vigil at the hide. From the obs window I then started hearing Johnny shouting followed by a silence and then a huge roaring cheer- so I assumed they were on to it. I quickly went back to hide and was met with this reception:
http://peteralfrey.blogspot.com/2010/05/big-day.html 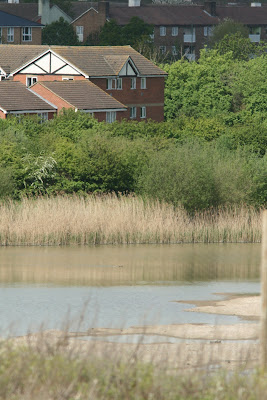 The Beddington Obs (my flat)- got it's first mega, Common Crane; a first for Beddington.
Posted by Peter Alfrey at 09:24

An absolute cracking find Pete and all from the comfort of your own home with coffe in hand!! It doesn't get much better! Nice one an I absolutely love the reception you received. Well done mate. Let's speak over weekend.

Terrific find, Peter - heard about it but didn't realise it was you adding it to your garden list!