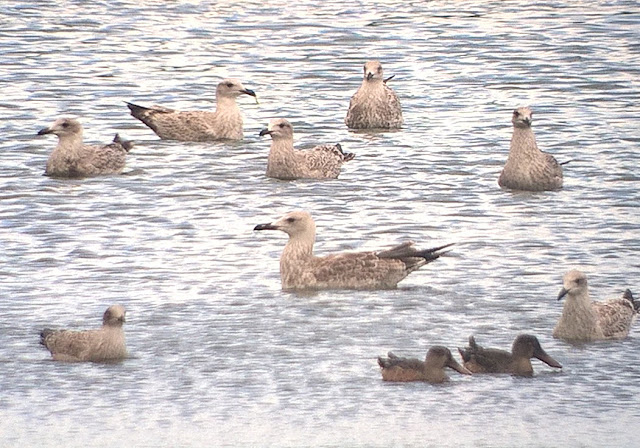 This bird was present on the North Lake this afternoon. Structurally the bird looks good for a Caspian Gull and the lack of strong contrast (typical of a first-cycle bird a little later in the cycle) is to be expected in a juvenile Caspian. There's a couple of anomalous features - the bird is in full juvenile plumage which is unusual for this time of year. Caspian Gulls breed earlier than e.g. Herring Gull so by now there should be some mantle and scapular moult. Also the upperpart colour looks rather dark, not the 'wet mud' colour that is more typical of a juvenile Caspian Gull. Finally the greater coverts have quite a lot of pale in them- typically there should be dark bases with white tips producing a white 'bar'. In flight the underwing was pale and when the bird stood out of the water the legs were long and pink-grey. So overall a lot of pro-Caspian features, which could well fall within the variation of juvenile Caspian Gull but also some non-classic features.

Like the overwhelming majority of humanity I really should just shut up and refer readers to a piece of work that has been thoroughly and expertly executed for the basis of an independent personal informed assessment so here it is: GULL RESEARCH ORGANISATION- FIRST YEAR CASPIAN GULL IN SEPTEMBER
Posted by Peter Alfrey at 15:41