Magic Seaweed forecast for Wednesday 13th September. The whole week is dominated by Atlantic systems and a westerly airflow across Britain and Ireland with the Azores High getting squeezed but overall holding its ground. Hurricane Irma has moved eastwards while Hurricane Jose (bottom left) persists north of the Caribbean. A mid-latitude depression forms in the wake of Irma but is deflected north of the Azores. The westerfly airflow off the Eastern Seaboard in conjunction with Irma will inevitably push birds out into the Atlantic but the predominate feature in the mid-Atlantic is a 'wall' of Southerlies effectively blocking a conduit for vagrants across the Atlantic. American migrants pushed out into the Atlantic could well make their way to European vagrant traps using ships or pushing against cross and light head winds.

The Westerly airflow penetrates well into the European continent 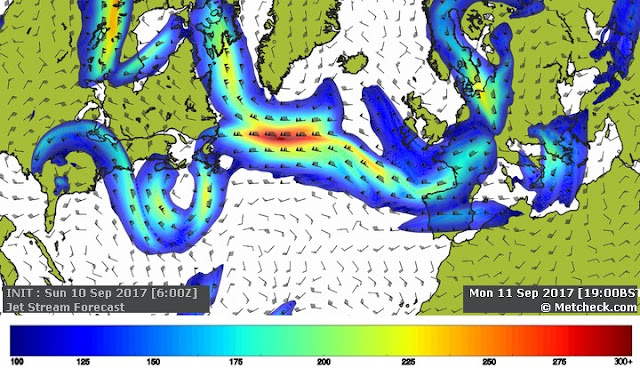 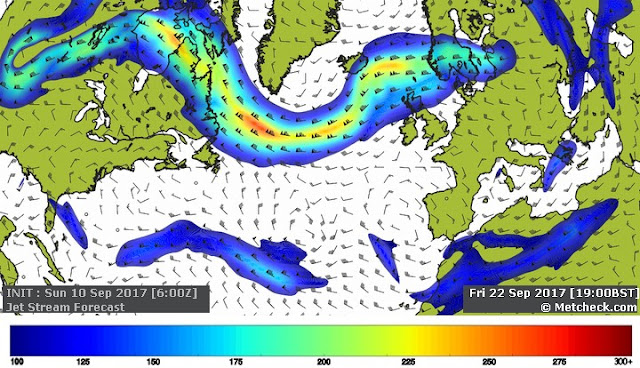 Local/ Beddington/London:
Raptors: Don't expect much. If there are breaks in the strong winds there might be local movements.
Passerine/landbird migrants: Don't expect much. Maybe a few Meadow Pipits and Hirundines.
Waders: A few could push through in this and could get grounded in some of the predicted rain . Good time of year for Little Stint and Curlew Sandpiper. Fingers crossed for an American wader!- the jet streams and Atlantic systems are good for this.
Waterfowl: Waterfowl numbers could continue to increase.
Gulls: Not expecting too much here.
Seabirds: Always a chance of a Kittiwake or a storm blown vagrant in conditions like this but wrong side of country really. Been a few shags about recently so keep an eye out.

Britain and Ireland
Migrant falls: Wouldn't except much. Maybe birds coming in from Iceland with the favourable tail winds.
Eastern vagrants: Very unlikely to see much action on this front.
American vagrants: With such a wild situation in the Atlantic always a chance this time of year for a yank passerine. Not an ideal weather situation but its the right time of year and its messy and westerly. Much better looking for american shorebirds/ waterbirds with a well positioned jet stream.
Seabirds: Almost certainly some interesting sea watching off the West coasts of Britain and Ireland. Could produce more inland Shags (been a bit of a recent influx) or other inland seabirds.
Raptors : Unlikely to be moving in these sorts of conditions.

Western Palearctic
Eastern Vagrants: Not a lot
American Vagrants: Could be interesting. Definitely keep an eye on the Azores.
Migration: The regional westerly airflow probably going to slow things down in the North West of the region. The Mediterranean basin is relatively calm so good conditions for progress Southwards. Not much in the way of fall conditions though by looks of it.

Rarity Finding Strategy:
Local: Check for waders and pray for an American wader. Keep an eye on Staines and the Thames Estuary.
UK: Check for american waders particularly in North and West. Sea watching in west has got to be a really good bet. Also chance of passage from Iceland- Pink-foots, Lap bunts across the region (mainly north).
WP: Corvo would certainly be worth a shot with such wild weather in the Atlantic and Irma affecting some of the main migration routes coinciding with a mid-latitude depression (albiet not a perfect storm).