Pretty much nailed last week's forecast (on the main feature being seabirds on British west coast) although might have been too soft on the extent of the potential for seabirds in the east especially considering that while looking for a yank wader I found  Red-necked and Grey Phalarope and inland Arctic Skua in London: Last week's prophecy here

An interesting week coming up. There's high pressure over much of central Europe and light winds over the North Sea. Looking west, hurricane Jose is moving north carving up the main migration routes on the eastern US seaboard and a large temperate depression forms over the North Atlantic that slams into the north west of Britain and Ireland.

The high pressure over Europe and light winds over North sea means there is little obstacle to eastern vagrants heading this way- they often don't need a tail wind to get here (although that east winds help a lot) , many are programmed to come this way, what they don't need are obstacles and blocking systems- strong westerlies or fronts.

So basically there could be interest from both sides although neither are classic conditions. It looks like the North Atlantic depression forms mid-Atlantic and is proceeded by a blocking high that is producing easterlies which could discourage birds moving away from Jose and into the Atlantic. However its a complex situation and looks pretty interesting and more so it's September and there are vagrants trying to get to all kinds of random pre-programmed destinations and many will fight agaisnt any conditions to get to somewhere completely random which in some cases is more dangerous than the journey to get there. Additionally there are the weakened birds that are true storm blown vagrants too and this week there is scope for these different types of vagrancy.

High pressure over Europe and light winds over North Sea- the road is more of less clear for vagrants heading east over Central Asia and Europe.

Magic Seaweed Map, Tuesday 19th September. Hurricanes still causing havoc in south east US. That high centred off Newfoundland is producing easterlies as it connects with Jose, presumably pushing any storm blown birds back towards the US.

Magic Seaweed forecast, Thursday 21st September . By late week there is a complete conduit on westerlies from the southern flank of Jose along the base of the North Atlantic depression and straight to SW England and Ireland. 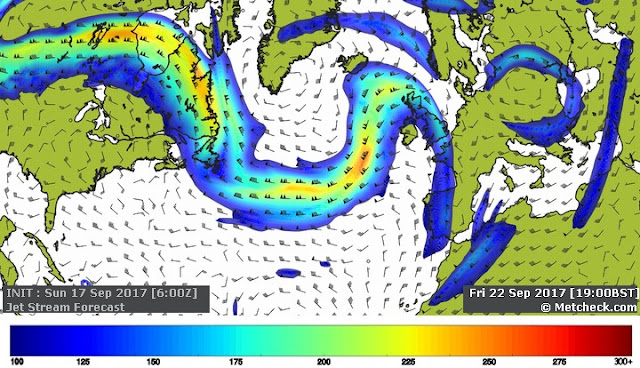 The jet stream is well south- could be providing passages for high flying migrants to the European coast.

Local/ Beddington/London:
Raptors: Calm days with sun could produce some raptor passage.
Passerine/landbird migrants: Not expecting too much in the way of drift migrants without cloud and east winds but could be a passage of hirundines and mipits and other migrants leaving Britain. Early part of the week has light north easterlies and cloud so that could be interesting.
Waders: It's peak time for waders. Wouldn't expect a fall but could be the odd interesting bird. Habitat at Staines is perfect for a yank wader and a regular turn over of waders that would normally move overhead unseen.
Waterfowl: Waterfowl numbers could continue to increase.
Gulls: Not expecting too much here- the odd Caspian gull last week at the Beddington.
Seabirds: There's a lot been displaced from last week's storms so still might be the odd one moving around.

Britain and Ireland
Migrant falls: Wouldn't except much apart from a steady trickle after the first part of the week where there are light north east winds and cloud belts moving across the North Sea.
Eastern vagrants: More interest in this department with hopefully birds on the out islands.
American vagrants:  It's mid-September there's hurricanes carving up the eastern US coastline and by late week there's a complete westerly conveyor belt of air moving across the Atlantic. Its looking better for a yank in Britain than the Azores maybe?
Seabirds: By the end of the week action could resume in the North West.
Raptors : Light winds and high pressure is pretty good to keep these chaps on the go.

Western Palearctic
Eastern Vagrants:  Should expect a steady trickle across the British out islands and Northern Europe.
American Vagrants:  Ireland and North West Britain looking best. Could get yank waders along the European coastline with such as southerly jet stream.
Migration: The high pressure conditions will undoubtedly be utilised by migrants to make good progress southwards. In the high pressure conditions could be good for nocturnal migration and arrivals at regular stop over sites. The early part of the week looks best for any drift and falls.

Rarity Finding Strategy:
Local: Check for waders and pray for an American wader. Keep an eye on Staines and the Thames Estuary. Keep eyes up for a raptor. Early week could be interesting for drift migrants.
UK: The Hebrides and Ireland are looking promising for yanks. The Northern isles and north east coast are looking pretty promising for eastern vagrants. East coast early week for drift migrants.
WP: Can't go wrong by being based on Outer Hebs looking for a yank, Northern Isles and Spurn etc looking for a eastern vagrant. Nocturnal migration could be interesting along European continental coastline and chance of american waders across a wide area. Not looking great for the Azores.
Posted by Peter Alfrey at 18:10