Holly's dad invited me to the Worminghall pheasant shoot today (a shoot he has been involved for over 20 years)  so I accepted the invite and went along as an impartial observer. It was an interesting day and particularly interesting considering I've been closely following the Hen Harrier debate and have no experience of country shooting (considering I'm native to South London).

Firstly, there were a lot of birds on the farmland the shoot was on; without trying I noticed 15 Lapwing, 40+ Mallard, 2 Teal, 80+ Linnet, 25+ Chaffinch, 10+ Yellowhammer, 1 Bullfinch, 100+ Fieldfare and Redwing, 4 Woodcock (3 shot), Grey and Red-legged Partridge, Common Buzzard and Red Kites. A lot of the birds were in the cover crops and copses that had been planted up especially for the shoot and the ducks were on a lake that had also been developed for the shoot.

More controversially Woodcocks and Grey Partridge were being shot, both species being subjects of conservation considerations.

Overall I found it very interesting day and I was made very welcome by a friendly group of people and a lot of organisation had clearly gone into the days events.

Highlight of the day was flushing a deer from a hedge that I presumed was a Muntjac but after putting a picture up on facebook it was re-identified as a Chinese Water Deer- a new species for me. 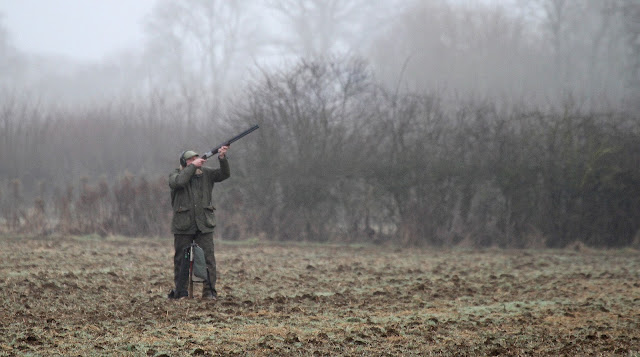 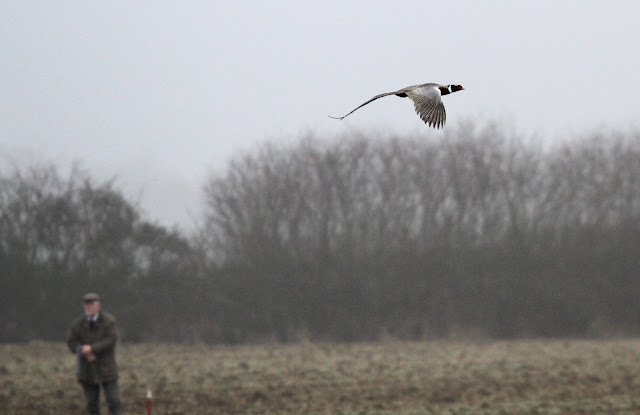 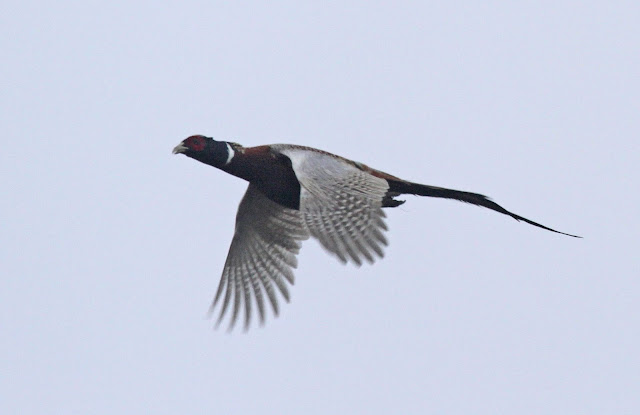 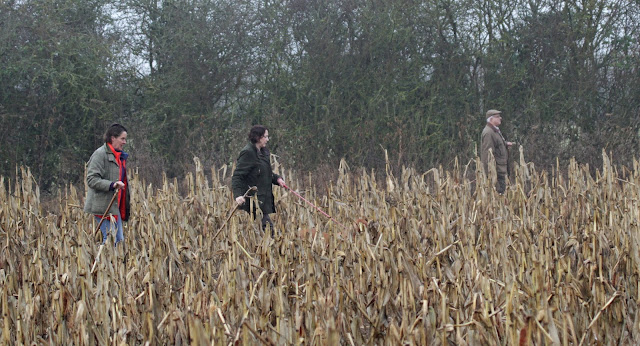 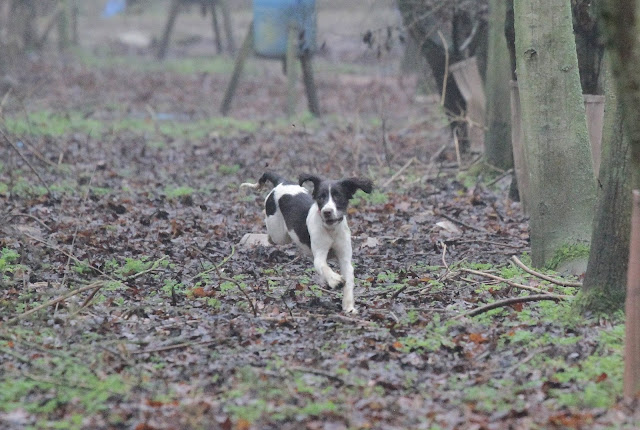 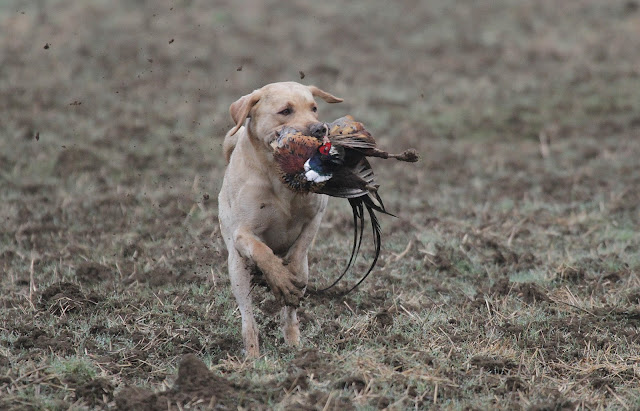 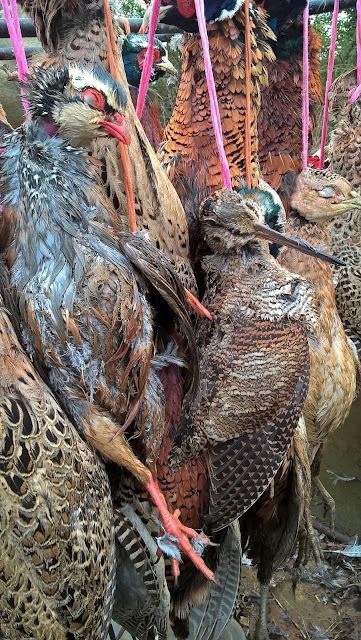 The bag included over 100 Pheasants, 10 Mallard, 1 Red-legged and 1 Grey Partridge and 3 Woodcock 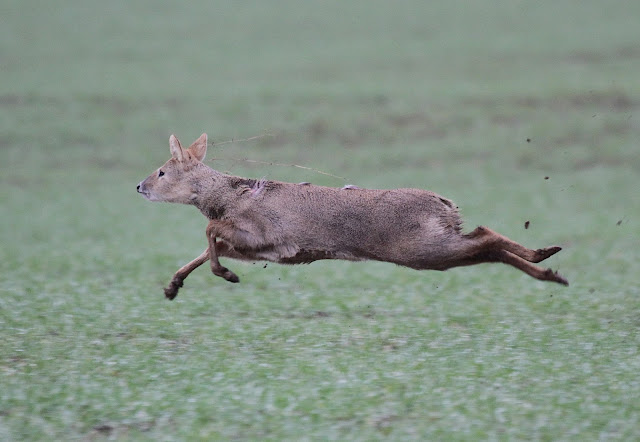 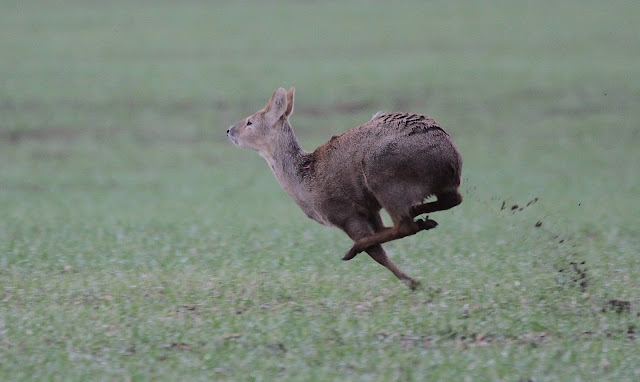 Chinese Water Deer - thanks to id from Richard Harris and others on my facebook page. Apparently the main features from Muntjac are the lack of stripes on the face, the softer facial features and also Muntjac hold their tail up when running.
Posted by Peter Alfrey at 13:26

Shame on you for going!

Shame on me if I was to be bothered by anything that anyone else thinks that concerns my carefully made choices.

I just don't see how you can be comfortable with posting pics of those birds strung up by their necks. Unless I've been reading your blogs wrong, it seems to go against the grain of everything you purport to stand for.

Plus, shooting is an amazingly 'Capiltalist' activity. Just saying' ...

Well done Peter for showing it as it is.
That's interesting the ratio of birds shot to those predated .

Interesting to get a rough idea of how many birds aren't shot in relation to release numbers, I've wondered about this and thought it must be quite significant. There are lots of pheasants nesting in Mum's garden as they have a shoot near the woods at the back and I see plenty around the area in general. Beautiful birds! Noisy in the mornings though :(

Sophie- will need to check if that figure is accurate or representative but presumably a lot do naturalise and are taken by predators too because they are everywhere in the countryside.

Belinda- I'm not a hunter- I went to see what's going on and reported back on it. I do eat meat and at the end of the day I don't think there is anything divinely immoral about the food web/chain/cycles. I do think there is something 'divinely' immoral about extinction, over-exploitation and fundamental capitalism.

The best way to form an opinion is to see for yourself. Wonder how much this differs from the large shooting moors in the north of England and Scotland? It sounds as though the land is far less intensively managed where you were. Look forward to chatting about it more. I remain saddened by the activity however.