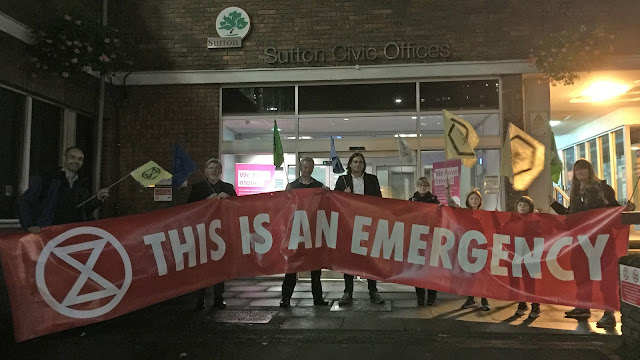 Last night, Sutton Council's, Housing, Economy and Business Committee heard the Public Petition that called on the council to take enforcement action on Viridor to deliver the Beddington Farmlands Nature Reserve as per planning obligations. The petition was signed by over 6500 people and was delivered by the Wandle Valley Forum (that represents over 130 community groups within the Wandle Valley Regional Park).

The meeting was held at the Sutton Civic Offices and meeting attendees were greeted by a small Extinction Rebellion Sutton demonstration outside and a van full of Policemen who were keeping an eye on the Extinction Rebellion Protesters. Due to Extinction Rebellion focusing on the London Protests this week, a small group were dispatched for this meeting, which was also appropriate considering this was a chance to deal with some technicalities and details and have an in depth discussion about the issues.

The meeting started with Councillor Nick Mattey 'the Rottweiler of Beddington North', asking the Committee Chair, Jane McCoy to stand down from the committee due to a lack of independence considering Councillor McCoy's role as a director of the Wandle Valley Regional Park Trust and that connection with the Council's business interests with Viridor.  The Chair was advised by her constitutional adviser that a declaration of interest was sufficient. 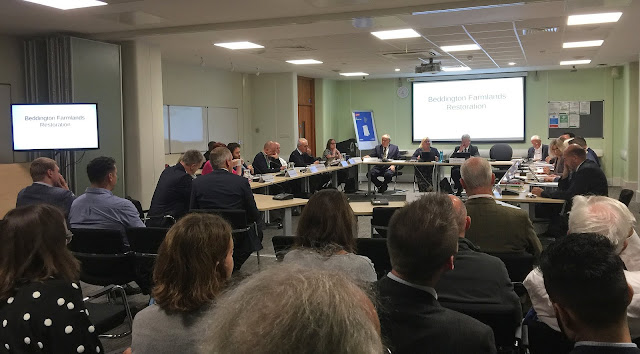 Following a speech from Lysanne (The Wandle Valley Forum Vice-Chair), Sutton Council's Head of Planning made some comments and after that Viridor's, Head of Sustainability Dan Cooke provided a response to the petition and finally councillors asked various questions.

The committee acknowledged the delays on the restoration and I had an opportunity to remind the committee of the significant ecological harm that those delays had caused.  Overall everyone in attendance supported the completion of the reserve and there was an acknowledgement by the Head of Planning that their enforcement team were working hard behind the scenes to discharge planning conditions. There was also an acknowledgement by the Chair that Sutton Council and local people had serious trust issues with Viridor and that Viridor needed to regain that trust. A decision was made to not take legal action but instead to call back Viridor to the Committee in six months time for a review of progress and then to call them back on regular basis until the project is completed and if the project is not completed by December 31st 2023 (the final deadline for completion with the planning condition) then legal action will be taken.

So overall probably the best outcome we could hope for. A good result and looking forward to seeing rapid progress of the restoration (they only have four years to catch up with a seven year delay and complete the whole project) and also hoping to rebuild our relationship with the council and Viridor and for us to help out as much as possible so that we can deliver a flagship urban nature reserve as a Local Community- Corporate- Government alliance.