A couple of puzzles at the farmlands today: 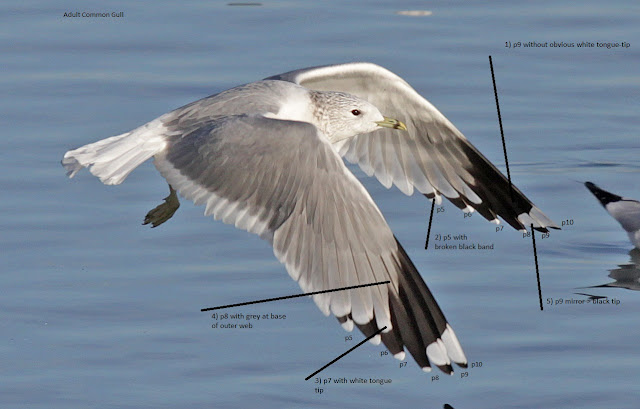 Following Adriaens and Gibbins 2016, this adult Common Gull keys out as nominate L.c.canus with the diagnostic suite of features as follows 1) p9 without obvious white tongue-tip, 2) p5 with broken black band, 3) p7 with white tongue tip, 4) p8 with grey at base of outer web and 5) p9 mirror larger than black tip.

Still on the look out for a 'Russian Common Gull' L.c.heinei 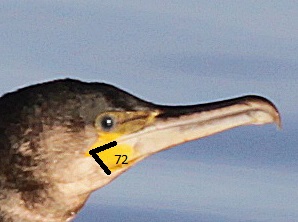 Cormorants at the farmlands can either be Continental Cormorant P.c.sinensis or Atlantic Cormorant P.c.carbo. Atlantic Cormorant has been confirmed by a ringing recovery. According to Constantine et al 2012 a 72 degree gular patch angle (the angle between the gape line and the gular patch to the base of the lower mandible) is just within range of either with carbo gular patch range 38-72 and sinensis 66-111 degrees.
(NB: Not sure I've measured angle accurately as haven't got a protractor and had to make one from printing one out and then trying to judge angle through paper and back light of computer- can anyone measure it more accurately?) .