Interesting note in the current issue of British Birds about the first confirmed case of a Yellow-browed Warbler returning to winter in Europe over consecutive winters. I was fortunate enough to review the note by former fellow Inglorious Bustard Simon Tonkin. Following our debut appearance as the Inglorious Bustards at the Champions of the Flyway HERE Simon and Niki went on to set up a successful bird travel company with the same name HERE and Holly does the art work for them. The company is based in Southern Spain and it was here that Simon made the over wintering discovery.

This is an eagerly anticipated result and could well indicate migratory evolution in action. I studied vagrancy intensively about 20 years ago and my studies eventually led to my discovery of Corvo which I predicted by using vagrancy theory. I tried to distil vagrancy theory in two articles I did for Birdwatch aimed at birders. The articles can be found here:

THE PIONEERS
FATE OR FREE WILL

I always thought that the gravity of these articles was never quite appreciated as if the theories are correct it goes a long way to explain the mystery of migration and how migration evolves.I deliberately wrote the articles and published in a popular media platform as opposed to trying to get published as a more scientific paper (such as BB or Dutch Birding) because I wanted to see what would happen if a potential scientific break through was published in a popular science magazine rather than a higher science publication. My experiment was to see what happens if a break through moves up through a scientific democracy rather than trickling down from a scientific traditional hierarchy.  Birders have been messing with this order for years so I wanted to kick it around a bit too.

Anyway Simon's discovery could well provide evidence to the theory that vagrants are pioneers and that Yellow-browed Warblers are currently forging a new migration arm and wintering area- a meta-population. What is very interesting about the development of this new arm and meta-population is the scale of the sacrifice involved. Since 1968 there have been over 30,000 Yellow-browed Warblers recorded in the UK and in 2017 alone there were over 2000 birds. They are so regular in the UK now that they have been de-classified to a common migrant (from a scarce migrant). Despite these enormous numbers, the evidence of the establishment of a meta wintering population is comparatively very small so presumably the overwhelming majority of 'pioneers' drown in the Atlantic or succumb by some other means. It would appear that evolution really is extremely indifferent to the immense scale of individual loss and suffering and death  (which doesn't bear well if my theories on human evolution are also correct and the Sixth Extinction and the current human population explosion is a bottle neck through which only few of us will pass- although I can't make my mind up whether it will be the super wealthy biotechnologically enhanced superhumans or a more 'pseudo-Christian' morally upright elite that are being selected!!!!  ) . Any way I digress, back to Sprites. 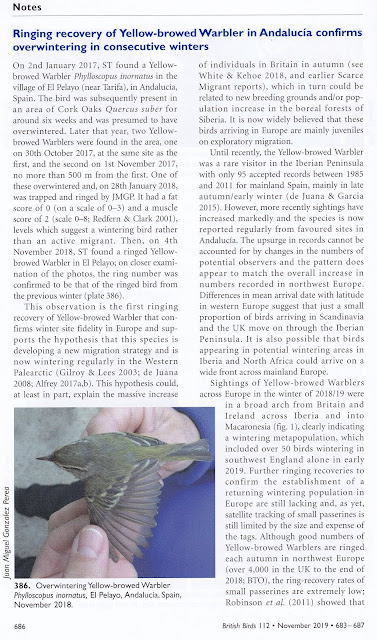 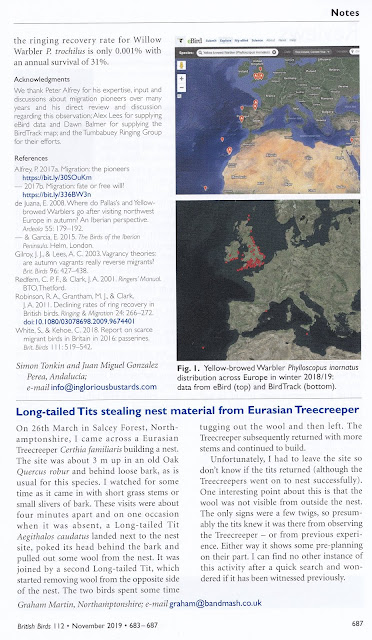