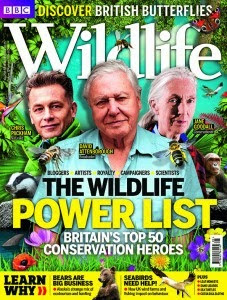 In a country where 60% of our biodiversity has disappeared in the last few decades- a power list of Britain's top conservationists is an oxymoron. What sort of hero can there be in a war that is being lost? Martyrs maybe?

The people and nature community is a small group of people where everyone is as powerful as everyone else. For instance a CEO of a national NGO is at the helm of a slow moving beast that's generally stuck in bureaucratic mud and wrapped tight with red tape. There is power but its caged and contained and there is certainly no more power than a purposeful single individual who is light, fast moving and is free to trail blaze and cause chaos if required. A large group or a popular figure with a big following may have the public's attention/support but many major changes are carried out by small groups of committed and dedicated people when the 'public' aren't looking. The 'public' are usually the last on the scene! There's so many things that distort the perception of power and things that hide the differences between real power and imagined power and also between positive and negative power. So there's the inverse relationship between popularity and prestige, the general public disinterest of reason and the insatiable appetite for distraction/consolation, the immense power of the swarm- if it can be harnessed, the need for power houses to keep pretending they have lots of power, the mirrors and the smoke, the long suffering lonely expert driving major changes invisible to most and the inverse relationship between the good of the ego and the good of  the community. When all things are considered- there is complete equality. Hero-worship and the cult of celebrity has the potential to suppress individual empowerment and if it does- it is the enemy within.  If not it's just a bit of fun and at best can inspire others to full fill their own potential.
Posted by Peter Alfrey at 09:25

Lol. I only make it on black lists! Cheers Steve.