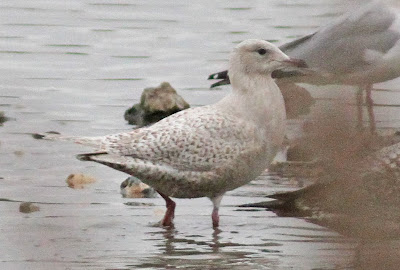 Seems to be a general consensus on opinion that this is a Kumlien's Gull (see below for more photos). Martin Garner has also kindly commented that he agreed that this bird showed the key features that he associated with juvenile/first winter Kumlien's Gull.
So I guess if there seems to be a general favour than this is a first for Beddington.. but as it's a taxonomic enigma not sure where and what list it is going to go on !? Is it a hybrid, a good species formed as a result of hybridisation or a sub-species of Iceland Gull? It's a bit of a taxonomic wild horse.
Posted by Peter Alfrey at 23:51