Focusing On Peregrine at Beddington Farmlands 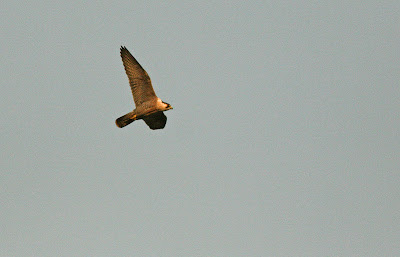 The pair of Peregrine were showing well today- got this photo of the male.
One of the more positive stories to tell about Beddington's birds.
The first record was in 1947 but there were no further sightings thereafter until 1993. This was mainly related to the poor fortunes of this species on a regional scale due to human persecution and DDT poisoning.
The bird in 1993 was welcomed with great excitement and by 1994 there were 11 records which was later to prove to be the beginnings of a mini-colonisation. Between 1994 and 2002 records fluctuated as the species struggled to get a toe hold with only 3 records in 1997 but by 2003 over 30 records marked the tipping point with birds at Beddington believed to be the pair that were breeding on Battersea Power Station. Pairs were soon after found breeding in central Croydon and in the last few years a pair has become established in central Sutton. Using the surrounding power stations and tower blocks as 'man-made cliffs' and watch towers it is great to know that these South London Pergrines are using Beddington Farmlands as one of their key feeding areas.
Posted by Peter Alfrey at 03:07

Hi Peter, much enjoying reading your blog and finding out how my old patch is doing. I remember the 93 peregrine like yesterday, cant recall if I had the first sighting that year but I was stood in the hide with Mr. Chasteauneuf and it flew over us from behind. I shouted so loudly that I think every duck on the lake took off vertically! very good year that was!

Walshy!
93 was the nuts. Citrine Wagtail and Rustic Bunting (your birds), Little Bunting, Velvet Scoter and Eider to name just a few.
Come back and find us some rares!

Long may it continue.