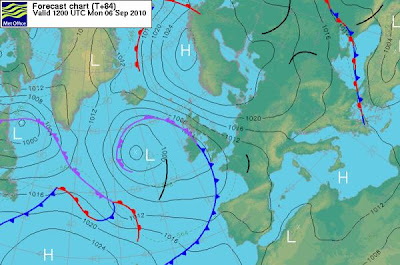 Regional
A high pressure over most of Europe presents a window for migrants on east sector to west sector headings. These migrants are a result of migration dispersal - where individuals in a population migrate in different directions - the majority in the most established (successful) direction but others in 'experimental' directions. These migrants could be sourced from further east so the potential for vagrants is high. As these migrants head towards the west coastline of Europe the strengthening south east winds should start to funnel and concentrate them onto the east coast headlands and Northern isles. Critical to this pattern of vagrancy is a no-obstacle high pressure system over Eurasia.
Prediction: Eastern vagrants and scarce migrants on the Northern Isles and North-East Coastline in the next five days.
Local
These high pressure cells with east sector winds can be good for raptor passage. There was a big passage of raptors off Spurn yesterday so perhaps some will make their way overland and south over the next couple of days. Without cloud cover birds can be very high and most migrants head straight over without needing to stop.
Prediction: Hopefully some raptor activity at Beddington in the next couple of days. The odd grounded migrant. Hirundine passage. Fog in the mornings could help to ground some of those migrants going overhead.
Posted by Peter Alfrey at 21:00

I got this one pretty close. See above.