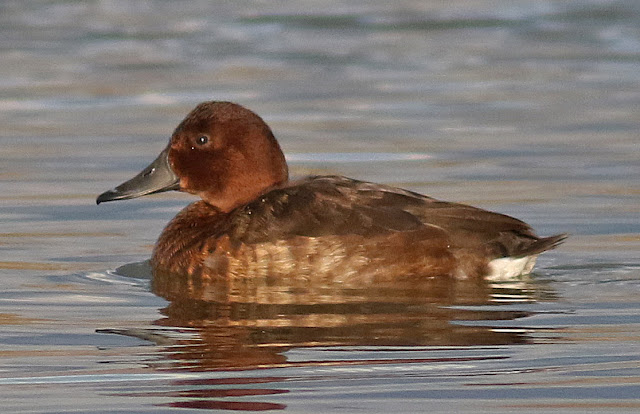 David Campbell picked out this interesting Aythya yesterday. Superficially looks like a female/immature Ferruginous Duck. The reddish-brown colouration, contrasting white undertail coverts, the high peaked crown and black-tipped bill with a bluish sub-terminal band are suggestive of Ferruginous Duck. However hybrid female/immature Ferruginous Ducks are notorious look-alike traps and there seems to be several features that indicate it is a hybrid. In this image a subtle grey scalloping is visible on the mantle features, there appears to be a darker breast that contrasts with the flanks and the white undertail coverts don't appear to have a dark border. In a pure bird we would expect to see a more uniform colouration between the breast and flanks and a lack of scalloping on the upperparts with a black bordered white undertail covert patch. 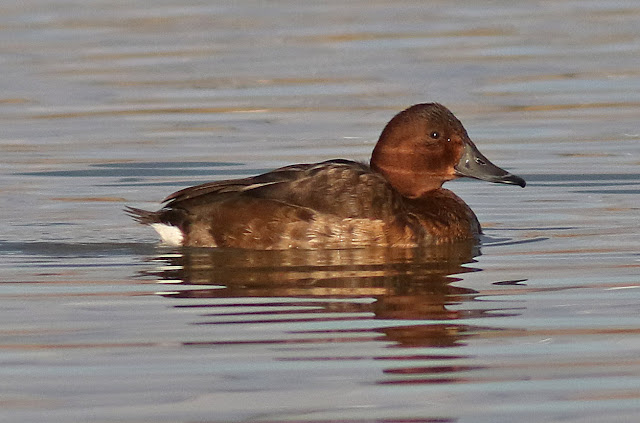 Similar features are shown on the other side of the bird. Also to my eye the overall colouration is more brown-red rather than red-brown. 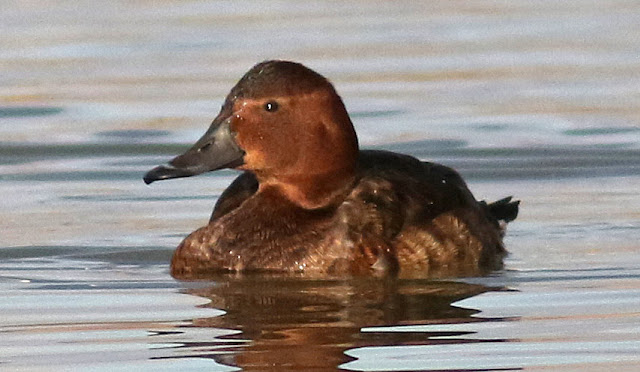 Even though the bill has a superficially Fudge Duck pattern on close inspection the bluish sub-terminal band is obliquely angled and the black tip is extensive. A black tip confined to the nail of the bird is a feature of male Ferruginous Duck but in females this feature can be more variable with an extensive dark tip. However the dark tip is very extensive on this individual and the blue band should be less obliquely angled pointing towards a hybrid. 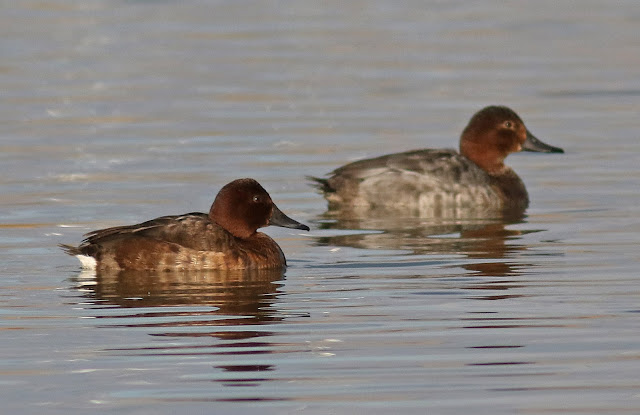 Compared to a female Pochard the crown is visibly higher peaked with a more steeper forehead and less concaved profile from crown peak to bill tip. The profile is quite Ferruginous duck like. 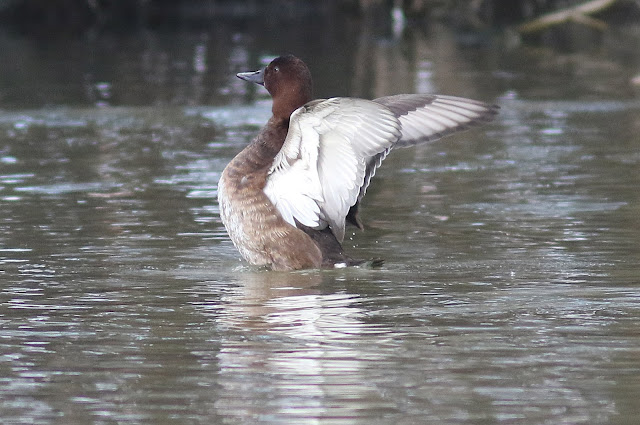 The underwing is overall white which is a feature shared by Tufted Duck, Pochard and Ferruginous Duck but the trailing edge on the underwing is quite diffuse- more Pochard like. 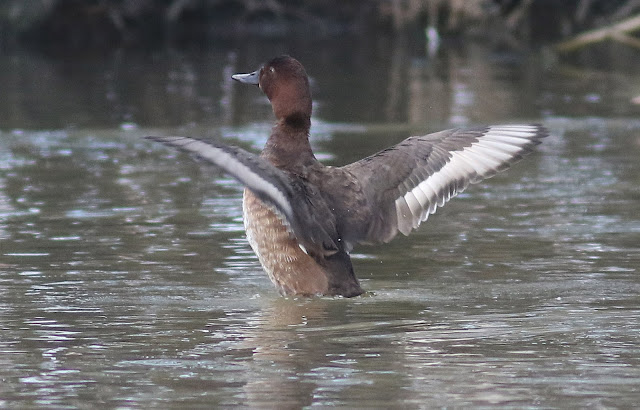 The spread upperwing is also quite Ferruginous Duck like with dark tips to the secondaries and primaries forming a broad band on the trailing edge of the wing. On Pochard there are no dark tips to the secondaries (but there are on Tufted Duck). The band pinches in on the inner primaries which is an unusual pattern and the broad wing bar is greyish rather than white. Again a mix of features. Overall an interesting bird presumably with either Ferruginous Duck ancestry or a remarkable lookalike from a Pochard x Tufted Duck pairing. 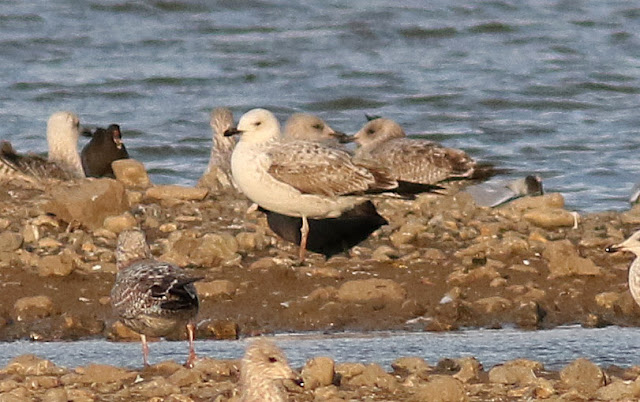 We were actually doing the gulls before we got distracted by the duck. This first-winter Caspian Gull was one of three different Caspian Gulls. 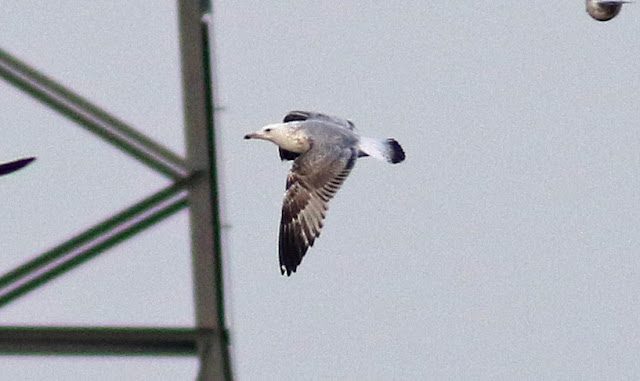 Second-winter Caspian Gull (bird #1). It doesn't show too well in this shot but the mantle and scaps  were finely streaked. The distinctive mirror on p10 is obvious in this photo. 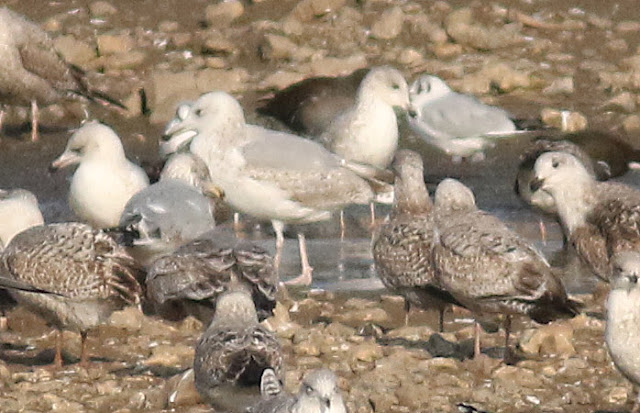 Second-winter #2. The mantle and scapulars of this individual are much more uniform than the bird above. 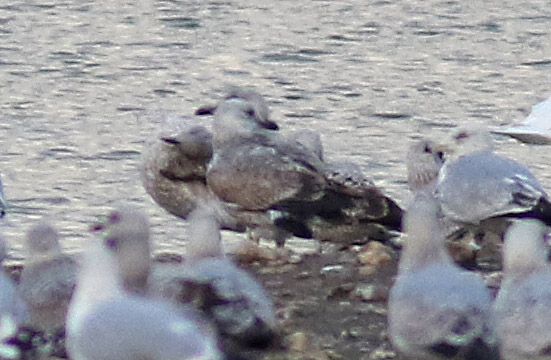 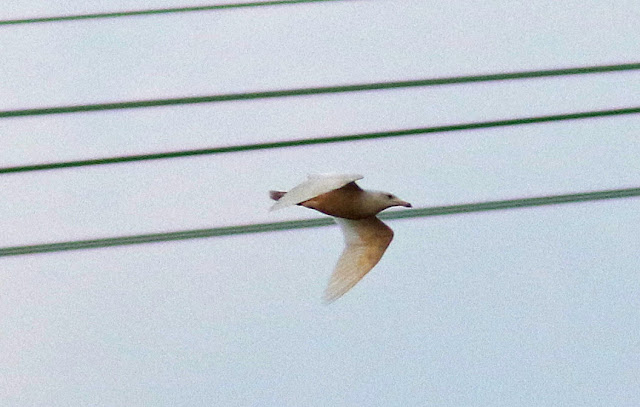 and to conclude proceedings on an overall rather interesting session with Kojak and Dave at the farmlands- the first-winter Glaucous Gull (a pale morph) made a fly by.

There appears to be a lot of Pochard in that duck Peter!

I agree- Pochard is a main ingredient

Equally got some serious Fudge in there...

The second 2w Caspian Gull (i.e. the one not in flight). I wonder if it's this big bird returning (also seen by Rich on the Thames up his way): http://joshrjones.blogspot.co.uk/2017/03/good-gulling-at-beddington.html